Finally getting the sonic resurrection needed for over 75 years

The recording sessions at Abbey Road's Studio One which took place on 23rd and 24th March, 1932, were memorable ones. Both days featured Artur Schnabel recording a Beethoven Piano Concerto with the London Symphony Orchestra, conducted by the then-unknighted Dr. Malcolm Sargent.

These must have been quite significant recordings for the HMV catalogue, with the UK's premier orchestra under the baton of one of the countries top young conductors (Sargent was 37 at the time), with one of the all-time great interpreters of Beethoven's piano works seated at the keyboard. No doubt everyone concerned gave their all - though as was usual at the time, retakes were the exception rather than the rule, and the odd minor mistake may have occasionally been allowed to pass.

But someone at Abbey Road was clearly having a very bad couple of days indeed. Maybe the microphone was a dud, maybe the disc cutter's amplifier had developed a fault, who can say? But there can surely be little forgiveness for the absolutely atrocious tonal quality of the two recordings, the 1st and 5th Piano Concertos, that were cut to disc on those two days in March 1932. One can only assume that HMV producer Lawrance Collingwood had a bad cold or blocked ears for these sessions - or perhaps was too busy schmoozing with his stars to pay proper attention to the efforts of his studio engineer.

I tackled the Emperor Concerto some time ago, as one of the first candidates for XR remastering, and a prime one at that. Since then, remastering techniques and software have continued to be refined and advanced, and we are able to present in the First Piano Concerto what is one of the most dramatic and remarkable sonic transformations yet achieved for recordings such as this.

It is somewhat ironic that the hopeless tonal quality of the original recordings, caused to a great extend by a huge boost in the region between 2kHz and 5kHz to give a harsh, nasty and unpleasant sound both to the original discs and every transfer I've heard prior to this, actually does me a favour, as this is where the ear is most sensitive to noise. The re-equalisation to correct this particular anomaly immediately gives me an extra 8dB of signal-to-noise ratio right where it's needed, and also helps the piano in particular to cut through exceptionally well for a recording of this vintage.

The Second Piano Concerto, recorded some three years later with the London Philharmonic (Sargent had fallen out with the LSO over his support for Beecham’s formation of the London Philharmonic Orchestra during the summer of 1932 - as a result, the other three Beethoven concertos were recorded with the LPO rather than the LSO in 1933 and 1935) is a much better effort from the studio, but lacks this bizarre treble boost, and as a result it often somewhat noisier in replay after remastering than its earlier sibling. However, this is offset to a degree by the better overall tonal quality of the source material, which has also responded very well indeed to XR remastering and exhibits slightly greater depth and less of a propensity to occasional peak distortion than the 1932 recording.

All original 78rpm discs from the Pristine Audio collection
Transfers and XR remastering by Andrew Rose at Pristine Audio, November 2009
Cover artwork based on a photograph of Artur Schnabel 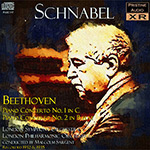