A beautiful collection of some of the finest Elgar recordings

These recordings, all sourced from excellent near-mint copies expertly transferred by Edward Johnson from his private collection, where a delight to restore. Very little complex restoraiton was required, and XR remastering worked a treat. These recordings have been one of those delightful collectionc which I've spent more time listening to than restoring - which is something of a rarity here at Pristine! Wholeheartedly recommended.

Transfers from the collection of Edward Johnson
XR remastering by Andrew Rose at Pristine Audio, June 2009
Cover artwork based on a photograph of George Weldon 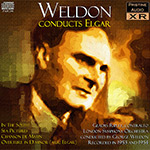 "Gladys Ripley made a recording of Elgar's Sea Pictures in 1946, with George Weldon conducting the Philharmonia Orchestra (H.M.V. C3498-3500) which I reviewed in the July number of THE GRAMOPHONE in that year, and I find now that I could repeat that review word for word except that there is now no astringency in the tone of the violins in the first song, or in Sabbath Morning at Sea. Miss Ripley's lovely voice is ideal for these songs and, as I said before, she sings them with complete understanding and is free from all the usual contralto vices of hooting and scooping. Elgar is not always very sensitive in his setting of the words, as such, and indeed makes nonsense of some lines of the first song (Sea Slumber Song), but his music gives distinction to some indifferent poetry, the orchestral part is full of imaginative touches, and his vocal line has a fine sweep and singable-ness that seem to have departed from most vocal writing today. George Weldon and the L.S.O. provide a sensitive accompaniment, the balance is excellent, and altogether I found these five songs as enjoyable as ever..."

This CD is a boon to the Elgar aficionado. George Weldon (1908–63) was one of the most accomplished English conductors of his generation. After a successful seven-year tenure as conductor of the City of Birmingham Symphony Orchestra, in 1952 he became assistant conductor to Sir John Barbirolli with the Hallé Orchestra, where he remained until his death. He was a well-loved figure in Manchester, taking charge of the orchestra’s summer promenade concerts and industrial concerts in the North of England. The eminent record producer Brian B. Culverhouse wrote that Weldon was the only conductor he ever saw an orchestra applaud following a recording session. The orchestra was the Philharmonia. He was the type of conductor Sir Thomas Beecham had in mind when he made his celebrated comment about the English hiring third-rate foreign conductors when they had so many second-rate ones of their own. Not that there was anything second-rate about Weldon at his best. He recorded a marvelous stereo LP of Elgar’s shorter works with the Royal Philharmonic that used to be available on RCA Victrola. He was in demand as an accompanist on recordings, doing Tchaikovsky with Moiseiwitsch and Grieg with Gina Bachauer, the latter formerly on a Seraphim LP. The recordings on this CD are monaural sessions from 1953–54.

This is the slowest recording of In the South I’ve ever heard. Compared with Solti’s quicksilver version, it might even be mistaken for a different piece. The work opens with a tremendous forward thrust and a great feeling of spaciousness. The first quiet episode is particularly meditative, setting the scene for the rest of the performance. The tone quality of the LSO throughout is richly autumnal. The original tune that Elgar tried to pass off as an Italian folk song is evanescent and sublime, with beautiful solo work from the orchestra. The climax of the piece is superbly paced and deeply emotional. This is a memorable interpretation.

The only modern recording of Sea Pictures I had on hand for a comparison was Linda Finnie’s with Bryden Thomson. That certainly is a good rendition, but it lacks the idiomatic quality and sense of identification of Ripley and Weldon. Gladys Ripley’s contralto is the sort of English voice we don’t hear anymore. Its tone quality is familiar to Americans from old D’Oyly Carte Opera recordings, but with a richer sound that is more artistically deployed. Ripley and Weldon previously had recorded Sea Pictures in 1946 with the Philharmonia, but Brian Culverhouse prefers this 1954 account. Weldon’s accompaniment here is alternately full-blooded and sensitive. A typical conductorial touch is in the rocking string figures in “Where Coral Lies.” In the opening “Sea-Slumber Song,” Ripley evokes calm and rest. The high point of the performance is the central “Sabbath Morning at Sea,” text by Elizabeth Barrett Browning. Ripley’s singing becomes positively rapturous at the lines, “He shall assist me to look higher/Where keep the saints, with harp and song/An endless Sabbath morning.”

Chanson de matin is delicately played. It is the only track on the CD that displays any surface noise, quite remarkable, since remastering engineer Andrew Rose was working from vinyl sources. The Overture in D, a transcription by Elgar from Handel’s Chandos Anthem No. 2, shows how indebted Elgar was to Handel in the study of writing for strings. It is a thoroughly successful treatment of Handel for the Romantic orchestra (with even a snare drum). Weldon’s performance is thrilling.

All the recordings on this CD were made at EMI’s Abbey Road Studio 1. Andrew Rose has provided sound that shows off this studio at its best, with rich and well-blended textures. Except for the short playing time, this disc is enthusiastically recommended. Let’s hope there’s more Weldon to come.