The present collection offers a good example of the rapid development of recording technology during the 1920s, as well as Hertz’s misfortune to have been at the tail-end of obsolescent methods. When the Victor Talking Machine Company’s mobile recording unit arrived in San Francisco in January, 1925, acoustic recording was just on the verge of being replaced. By March, Victor would begin using the new electrical method for all its sessions. Indeed, their first electrically recorded Red Seal release (Cortot performing Schubert and Chopin) was Victor 6502, just two catalog numbers after the final disc of Hertz’s Parsifal excerpts.

For their next visit (April, 1926), the Victor engineers brought electrical equipment, but continued to use a small studio and what appears to be acoustic-style tuba reinforcement of the bass line for Hertz’s Tristan recordings. Coupled with the fuzzy sound of the loud passages, the overall result is more comparable to the 1925 electric orchestrals Victor had been producing than the more open, natural sound afforded Stokowski the Philadelphia Orchestra in a session held two months later in the Academy of Music (two Strauss waltzes on Victor 6584). The brief passage linking the end of the Prelude with the beginning of the Liebestod is omitted in this version, probably due to timing issues related to Victor’s decision to issue them separately on one 12-inch and one 10-inch disc.

By the time of the April, 1927 San Francisco sessions, the recordings had been moved to a larger hall, and a warm, full acoustic was provided for the Hungarian Dances, which Hertz dispatches with tremendous vitality and élan. The recording of Les Préludes from the following February, however, is hobbled by an acoustically-compromised dubbing on the first side, (which was, unfortunately, the only way it was released). The performance itself rivals Mengelberg’s more famous Concertgebouw version from the following year.

The sources for the present transfers were the original arch-label discs for the Parsifal sides (their only form of issue); pre-war “Gold” label pressings for the Tristan and Hungarian Dances; and scroll-label “Z” pressings for Les Préludes. The severe pitch fluctuations in the original Tristan sides have been corrected in this transfer.

Producer and Audio Restoration Engineer: Mark Obert-Thorn
Cover artwork based on a photograph of Alfred Hertz 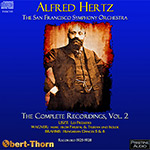