Master-arranger Carmen Dragon with members of the LA Phil (probably...)

Capitol Records were, in the 1950s, one of the pioneers of stereo recordings, both in the popular and classical field, and for some time made entirely separate recordings of albums in both mono and stereo formats. This can be heard clearly in recordings by the likes of Frank Sinatra, where, for example a close-up multi-miking technique was employed for the mono recording of 'Come Dance With Me', resulting in both greater impact and intimace, whilst the stereo recording was made with two or three overhead microphones, capturing an entirely different perspective of the same recording.

As such, some of these early Capitol stereo recordings are considered to have worked better in their mono format, whereas others fared better in stereo. The selections here, taken from two albums recorded in 1956 and 1957 and probably destined originally for reel-to-reel tape release prior to the commercial development of the stereo LP, almost certainly fall into the latter category. The sound is big and wide - an ideal way to show off one's new-fangled stereo 'hi-fi' equipment!

Edward Johnson's excellent LP transfers have been further enhanced by the use of XR remastering - as with many orchestral releases of this era there was a tendency to a certain shrill glassiness in the upper strings and a slight hole in the lower mid-range. With these relatively minor adjustments in place, together with a taming of a degree of bottom-end boom the recordings really came to life. We suspect that in both cases the orchestral players were probably an assortment of members from the LA Philharmonic and possibly some of the film studio orchestras. The fact that they're given two different names for the purposes of these two LPs doesn't rule out the strong possibility that they were largely the same outfit.

Either way, this is an excellent 'fun' release, with Dragon's superb arrangements excellently played and recorded. If, in the words of Edward Johnson, our sample track Funiculi Funicula doesn't get you "dancing around the kitchen table" then either you have no kitchen, or your kitchen has no table...

Transfer from Capitol SP8427 and SP8351 by Edward Johnson
Restoration and XR remastering by Andrew Rose, August-September 2009
Cover artwork based on a photograph of Carmen Dragon 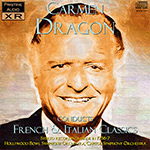