This collection brings together two fascinating collections of recordings from two concerts given some fourteen years apart. The first four items are taken from a unique set of recordings made by Bell Laboratories on 2nd April 1924, and comprise the only known surviving sides from this concert. Developments in recording technology were urgently needed with the advent of radio, where the use of electric microphones was able to reproduce sound of a quality and frequency range which the acoustic recording process of the day simply could not capture.

Bell were at the forefront of the development of an electrical recording system, capable of cutting disc masters using electronics for the first time in place of the entirely mechanical horn system that had provided all recordings for over a quarter of a century. Knowing that the new system would need to be able to cope with a very wide range of pitch and dynamics, the engineers at Bell realised that the best test of their system could only be a full symphony orchestra.

However, without a suitable studio and the money to experiment in this way with an orchestra, clearly an alternative means of testing their equipment needed to be devised. Fortunately the regular live radio broadcasts from Carnegie Hall could be fed not only to the transmitters, but also directly by wire into Bell's engineering facility. Despite the fragmentary nature of these recordings and their age, they provide us with unique insights not only into a nascent technology still in essence in use today, but they also constitute the only known live recordings of Mengelberg conducting the New York Philharmonic. Furthermore, this is the only known recording of Mengelberg conducting the Mendelssohn Violin Concerto, and may also be the only electric recording of the soloist, the violinist and composer Samuel Gardner, who had previously cut three acoustic sides for Victor in 1915.

The BBC recordings are also very special, comprising the only known record of Mengelberg with the BBC Symphony Orchestra. Once again the repertoire contains unique recordings - although other recordings exist of the Mendelssohn Scherzo, neither the Overture nor the Nocturne from A Midsummer Night's Dream exist in any other known Mengelberg recording. Finally the short surviving fragment from Berlioz's Symphonie Fantastique is the only recording of Mengelberg conducting this work.

These transfers, provided by a private collector, have provided me with great technical challenges. Clearly Bell wished to test the full dynamic range of their recording system, and whilst a full-bodied sound is achieved in the louder sections, the very quietest notes often seem almost to disappear into the background noise. Meanwhile it has been suggested that the BBC acetates from which the 1938 recordings were transfered had been rescued from a waste bin - not the ideal storage medium for so delicate an historic document...

Transfers of live recordings from a private collection
Restoration and XR remastering by Andrew Rose, June-September 2009
Cover artwork based on a photograph of Willem Mengelberg 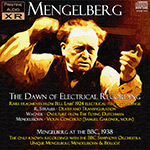 For those who care, it is a revelation, a treasure to be savored

This CD, also available as MP3 and FLAC downloads (www.pristineclassical.com), is unique in many ways. The New York Philharmonic items were recorded electrically by Bell Telephone from a telephone transmission line of a radio broadcast, as an experimental test of the system of electrical recordings that it was developing at the time. Along with three earlier broadcasts of Philharmonic concerts (December 3 and 17, 1923; January 21, 1924), they are the first live recordings of a symphony orchestra. Why doesn’t this disc include those earlier recordings? Because they were conducted by Willem van Hoogstraten, co-conductor of the Philharmonic—he led 37 concerts that season, Mengelberg 33—but forgotten today. The two Death and Transfiguration excerpts (a total of 11 minutes and 45 seconds) were first released in a New York Philharmonic 10-CD historical set; the other items on this disc are first releases, although they have long circulated in the tape underground.

Which brings us to other reasons why this disc is unique. Mengelberg recorded the Strauss and Wagner pieces in the studio, plus the Mendelssohn Scherzo, but the other works are new to his discography. For better or sometimes worse, his live performances were always wilder than his studio recordings. Pristine’s transfers of Tod und Verklärung excerpts (oddly, this French outfit uses English titles) are noisier than those in the New York Philharmonic’s own 10-CD historical set, but they seethe and surge with life. Anyone comfortable with historical recordings will be able to feel the dramatic power of this performance. It is upsetting to be dropped into the middle of an extensive piece (and then pulled out), as is the case with all the New York recordings. The orchestral playing is nowhere near as sophisticated as that in Mengelberg’s 1942 Telefunken recording with the Concertgebouw, however, and this Flying Dutchman is dreadful; Mengelberg and Toscanini would whip the New Yorkers into top shape over the next few years. The Violin Concerto is better, as the conductor is not pulling out all the stops, but the brass do make a few obnoxious intrusions. Samuel Gardner is not an exceptional instrumentalist, so the performance is merely decent.

The 1938 BBC concert was very well recorded, but damaged acetates have added to the distortion. Again Pristine gets more body and color to the sound than I could have imagined from multigenerational copies of analog tapes in the bad old days. But analog has still been in the mix, as there are (minor) signs of tape stretching. The playing is wonderful, except for the horns, which we used to be told were the Brains, father and son. The Mendelssohn Overture has a thrilling, unmatched vitality, although it has lost most of its gossamer subtlety. The Nocturne—both the playing and the sound—is unlistenable; I cannot believe it comes from the same performance. The Scherzo is back on track; it’s as fine as Mengelberg’s Columbia recording. The Fantastique excerpt (the first 3:25 of “Un bal”) is the finest performance and the finest sound on this disc. It is flat-out gorgeous, swinging as never since, making us wish that Mengelberg had recorded the whole symphony, and suggesting an additional reason why van Beinum’s three Concertgebouw recordings are so special. There were rumors for years that complete acetates of this Mengelberg performance exist, but I haven’t heard anything lately.

Ninety-five percent of our readership would hate this disc, but, for those who care, it is a revelation, a treasure to be savored.