These transfers, made by Edward Johnson from his own collection, bring together three excellent recordings made in the first half of the 1950s by Eugene Ormandy of Russian classics of the 20th Century. The two works by Stravinsky will be familiar to most, though the Petrushka Suite is a cut-down version to that found on most recordings today, and Ormandy plays through the two parts of The Rite of Spring as if they were one, with no gap - possibly in order to squeeze the entire work onto a single LP side. Both recordings have responded very well to XR remastering - with excellent transfers of near mint LPs going a very long way to assist in this. The remastering has revealed an openness and depth to the recordings which, in their original incarnations, were sonically quite restricted, revealing altogether more enjoyable and satisfying performances than one might have gleaned from hearing the original LPs.

Cailliet's Rachmaninov orchestrations, themselves rarely heard, are the only recordings Ormandy made of these delightful pieces. Alas, stepping back from 1954 to early 1950 one is only too aware of how much progress in capturing good sound had been made in the intervening years, and these three short recordings presented much greater challenges in restoration and remastering. A combination of poorer original acoustics and higher background hiss and noise, particularly in the second of the three recordings, all had to be overcome, and I'm quietly pleased with the results I was able to obtain. If you've never heard these Preludes played by an orchestra, they're well worth investigating - and if you're a fan of Ormandy, they're essential!

Transfers from vinyl by Edward Johnson
Restoration and XR remastering by Andrew Rose at Pristine Audio, August 2009
Cover artwork based on a photograph of Eugene Ormandy 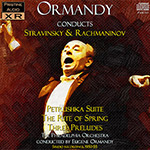