These recordings were taken from the tape archive of Stokowski recordings collected and maintained by the conductor's assistant, Jack Baumgarten. Although sound quality varies between the three broadcasts, and is perhaps marginally better for the Götterdämmerung Synthesis than for the other two concerts, all are in reasonably good shape for live broadcasts of this era. The final concert represented here, broadcast live from Birmingham, Alabama, would presumeably have been relayed by wire to the main CBS broadcasting centre, something which in itself would normally be expected to diminish the sound quality of the broadcast.

It is also clear that the engineer operating this outside broadcast was inclined once or twice to indulge in 'gain riding', possibly to avoid overloading the system and running into distortion problems. I have attempted to undo these level changes and present, as well as one can assume, something that bears a better relation to the volumes actually played.

Finally, there is evidence in the first recording of a small degree of pitch instability, or 'wow'. Although remastering has served to make this less apparent, it may still be noticeable in one or two section of the recording.

Sourced from tapes in the Jack Baumgarten archive
Tape transfers and XR remastering by Andrew Rose at Pristine Audio, August 2009
Cover artwork based on a photograph of Leopold Stokowski 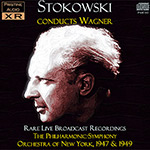