Despite his being one of the most prolific recording artists of the 1920s and ‘30s, it is remarkable that Leo Blech set down so few extended symphonic works. Most of his discography is taken up with overtures, preludes and operatic accompaniments (largely Wagnerian). Of longer works, there are three concerto recordings, all with Fritz Kreisler; Strauss’ Tod und Verklärung; and seven symphonies, nearly all of them Viennese Classical or Early Romantic: Haydn 88 and 94 (the latter, three times); Mozart 34; Schubert 5, 8 (twice) and 9; and the odd man out, the present Tchaikovsky.

But although it is an anomaly amongst his symphonic recordings, Blech’s Tchaikovsky Fifth is, in my opinion, one of the great statements of this score from the 78 rpm era, ranking in the company of such other worthy performances as those of Mengelberg, Koussevitzky and Stock. Its combination of lyricism and inexorable momentum is unique, and it deserves to be more widely known.

A word is in order regarding cuts. Unlike earlier recordings of the symphony, Blech opens up the then-traditional big cut in the fourth movement development section. However, in order to bring the work in on the ten sides Electrola allotted, he was forced to make a number of small cuts on the final side. Regrettable though they are, the cuts are nonetheless done with intelligence, and work with the flow of the music well enough that the casual listener may not be aware of them.

In the Serenade for Strings finale, Blech cuts the introduction and the restatement of the work’s opening theme before the coda in order to fit the work on one side. Played out of context as it is, it makes perfect sense. Less sensible is the idea of recording the Capriccio Italien on two sides with brutal cuts; yet, this seems to have been a tradition among German conductors, as there are also single-disc versions by Kleiber, Böhm and Schuricht during the electric 78 rpm era.

The sources for the transfers were the best portions of two German Electrola copies for the Fifth Symphony; an Australian HMV for the Serenade movements; and a British HMV for the Capriccio. A couple instances of blasting on the second side of this last work were present on all copies I could find and may be unavoidable. None of these performances (which comprise Blech’s complete recorded Tchaikovsky repertoire) have ever been available on CD or even LP, and I am grateful for the opportunity to present them before a wider public now.

Producer and Audio Restoration Engineer: Mark Obert-Thorn
Special thanks to Don Tait for the loan of source material
Cover artwork based on a photograph of Leo Blech 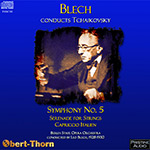 Knowing Leo Blech mostly as providing accompaniment to Fritz Kreisler, and as having recorded some of the Germanic repertoire, I did not know of the existence of these early (1928–1930) Tchaikovsky recordings, which have been beautifully restored here by Mark Obert-Thorn. What wonderful recordings they are, beautifully supple in tempos and even in dynamics, despite the limitations of the technology behind 78s. Blech subtly interprets Tchaikovsky without compromising the power, the thrust, or the lyricism that one associates with the composer. The 1930 recording of the Symphony has remarkable presence. Occasionally, as when the response of the horns in the slow movement is barely audible, one would change the balances if one could. But the sweep of the sound can remind one of Tchaikovsky’s best dance movements. Obert-Thorn is frank about cuts. There is no large cut in the development section of the Finale to the Symphony: evidently such cuts were common in the 78 era. But there are minor cuts in the movement.

The cuts in the other pieces may be more serious to some listeners. The Valse of the Serenade for Strings is intact, but the opening of the Finale is missing. To me it seemed something like turning on the radio to an unexpected place. I wish the Capriccio italien were not so radically cut: there, one repeatedly has the experience of being surprised to find oneself at another place in the score. And yet I would still want to hear that piece played so zestfully and lyrically under Blech’s hand. You’ll end up singing Tchaikovsky’s themes. Of course, these truncated performances, even the slightly truncated Symphony, won’t be anyone’s standard. There are symphony performances by Mravinsky to Pletnev that are complete, and, among others, Dorati’s Tchaikovsky overtures, and Britten’s and Karajan’s Serenade for Strings. If Blech had been their contemporary, his performances might have been the best of all.