One of the finest British Symphonies of the 20th Century

New transfer and XR remastering of this superb première recording

This is the third transfer I've made of this recording, which was the first to gain a limited release on the Pristine Audio label as a CD back in 2002. A second, and much more accomplished transfer, is currently available on the Divine Art label, coupled with a many other works by Moeran issued on 78rpm discs during the composer's lifetime. As a long-time promoter of the music of Moeran and editor of The Worldwide Moeran Database, I had long regretted that this Divine Art release was prepared just a few weeks prior to the development of what was to become the Pristine Audio XR remastering system, which has proved so effective in the present transfer, together with a host of other technical advances in the field of audio restoration during the last 3 years.

I was inspired, therefore, by the highly successful resurrection of the Symphony in the 2009 BBC Proms season to revisit the recording with a fresh transfer and see what results might be achieved. Despite the obvious end-of-side shortcomings of the often slightly over-long wartime discs, I was delighted to find further grest advances in sound quality were possible. The composer, told to stay away from the recording sessions, had concealed himself behind closed doors - only to make a tramatic appearance in support of principal clarinettist Pat Ryan over a disputed interpretation of a solo line - ultimately pronounced himself delighted at this definitive recording. I trust he would be equally surprised and delighted at the additional sonic progress made here.

Recorded "under the auspices of the Britich Council" in Manchester, England on 26th & 27th November and 1st December 1942, partially in the presence of the composer. 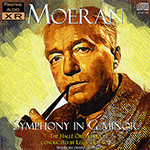 "This is described on the white-label pressings which I have as a "British Council recording": presumably a subsidised one, by the body which has sent out a good deal of British music, as propaganda, to foreign countries. The new move is a welcome addition to those means; here is a work strong in tensions, with lyrical episodes, most imaginatively scored: informal drama, tragic rather than humanely-comedic (though not for long doom-darkened) : a work to spend a lot of time on. Some of it — a good deal, indeed — should be spent on the score, which I have not seen. (The Rawsthorne fill-up, by the way, has not reached me.) The work was originally, I believe, meant as an invitation-composition, the Hallé Society having asked the composer for a symphony as far back as about 1926.

The music appeals to me by reason both of strength, even roughness, and its notably lyrical sense. You can divide as you like the "influences " in Moeran—the Irish and those of Norfolk, where he long lived. Anything Irish attracts me—the more subtly Irish the better: we had perhaps rather too long a spell of the " Arrah, bedad, acushla, begorrah" school..."

From The Gramophone: Analytical Notes and First Reviews, January 1943

"Only the staunchest followers of British or Irish music will be able to tell you much about EJ Moeran, wounded war veteran, pupil of John Ireland and drinking partner of Peter Warlock. Yet, his Symphony in G Minor proved surprisingly well worth dusting off for the BBC Philharmonic. Perhaps the first real orchestral discovery of this year's proms, it even stood up to the hefty counterweight of Elgar's Second Symphony after the interval.

Like his 1920s contemporaries, Moeran had English folk-music scales in his head, but his way of using them conjures craggy, isolated clifftops rather than cosy, pastoral scenes. He also shared Sibelius's knack for using repeated small ideas to create, almost by stealth, a sense of forward motion as unassailable as that of an ocean liner. Launching straight in with a sweeping string melody sustained over chugging horns, Moeran's score follows the conventional four-movement pattern, but the music's moods are many-layered and mercurial. A lot is packed into 45 minutes, and if the ensemble was not always the tautest, especially when the fastest string passages were revving up, Vassily Sinaisky's wholehearted conducting got a lot out of it..."

This intense Howard performance will come as quite a shock: the real thing

This wartime recording, made with the composer hidden in the hall, is the most distinguished recorded performance of the Moeran Symphony. Handley, Lloyd-Jones, and Boult are wonderful, and feature much better sound. But Howard inspires massive emotional commitment from the players, right from the first movement’s second subject, to the jagged close of the finale. Add a vastly rhapsodic account of the slow movement, plus a fleeting Scherzo, and you’ve a period piece that transcends its time.

The technical limitations can’t all be transcended, and the ends of the 78 sides feature limited sound quality. Divine Art has a transfer of the same version available, which I don’t know. This is Pristine’s second transfer, and it’s a big success, with space around the strings, clear winds and brass, and power in the drums and basses. If you enjoy Sibelius, Bax, and the English schools, then download or order this with confidence. If you already own the competition, and you like the work, then this intense Howard performance will come as quite a shock: the real thing.