Another treasure from our Lira Panamericana Beethoven radio series

The Lira Panamericana series of radio transcription discs featuring Toscanini conducting Beethoven were largely drawn from his Autumn 1944 cycle. However, the Sixth Symphony was omitted from the 'Beethoven Festival', having previously been heard during an all-Beethoven concert earlier that year, and it is that performance which was used here. Note too that all announcements were cut from these discs.

This was one of the first of the Lira Panamericana discs to be transcribed from this collection. As just about nobody had actually heard the disc in the last 60 or so years, it was not clear as to which recording it might contain - was it the March 1944 recording, or perhaps another. NBC had already inserted a 1939 Beethoven recording into this series, based otherwise around Toscanini's Autumn Beethoven Festival series of 1944 - might this be the same?

And so I sent off a copy to Christophe Pizzutti for identification as soon as a transfer had been made. It was intriguing for both of us, as it was also the first hint we would have of the quality - and shortcomings - of these early vinyl discs. His e-mail back to me was even more intriguing - the performance could be identified by a small mistake in the first movement at 6'12" - but he also remarked that the instrumental balance seemed quite different to a transcription of the same concert that he already knew. Could this have been taken from an alternative microphone feed? If so, might the two versions some day be joined in order to recreate some kind of primitive stereo?

That final question may have to wait. For now we can enjoy the remarkable fidelity of this recording, frustrated only by the technical shortcomings of wide-groove 33rpm vinyl discs made in 1944, of which I've written elsewhere in the notes for this series - as ever, surface noise and swish caused me some difficulties in this restoration, but as you'll hear from our first movement excerpt, they've been tamed to the extent that they should not at any point interrupt your enjoyment of a quite excellent recording!

Toscanini began a "Beethoven Festival" series of NBC broadcasts later in the autumn of 1944, and these were also recorded for special distribution to South American radio by NBC - specially pressed on out-sized 15.7" vinyl discs, cut at 33rpm but using wide-groove 78rpm cutters, each side could hold around 15-20 minutes of music with an extended frequency range significantly higher than that expected of standard commercial 78rpm discs at the time.

A near-full set of Beethoven's symphonies was assembled (excluding the 9th) from this series (topped up with earlier recordings of the 4th, 5th and 6th), together with recordings of three Piano Concertos, plus various overtures and chamber music transcriptions.

Transfer and XR remastering by Andrew Rose at Pristine Audio, July 2009
Cover artwork based on a photograph of Arturo Toscanini 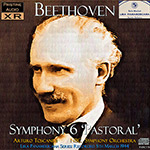