"...Finlandia receiving one the most fiercely dramatic recordings it's ever had ... The Fifth ... an exciting performance ... the work's closing moments beautifully balanced by both Ormandy and his American Columbia engineers... Andrew Rose's Pristine Classics transfer is first-rate" - Rob Cowan, Gramophone, Nov. 2009

These wonderful recordings have all restored well from transfers sent to me by The Stotowski Society's lynchpin, Edward Johnson, to whom I'm once again grateful. Of the four recordings, only that of the Fifth Symphony proved troublesome, and I suspect for a variety of reasons. Damage to the master tapes used for LP pressing was evident during the finale, characterised by a consistent amplitude 'flutter' in the high treble, particularly noticeable during louder string sections in the climaxes of the movement. Fixing this involved a careful selection of the frequencies involved and undoing the fluttering by a mixture of boosting each semi-dropout and reducing levels where which peaked too high - all within a specfic high frequency range. This is the kind of digital fix which has only become possible within the very recent past.

Rather odder was a bizarre de-tuning effect which occurred when my first XR re-equalisation was applied. This exceptionally precise boosting and reduction of frequencies seemed to have the effect of exposing what may well be inherent tuning discrepancies within the orchestra that day and exacerbating them - even without this equalisation one senses at times that the strings and woodwind are not entirely in tune with each other, but with it the sound occasionally was more that of a high school band than the Philadelphia Orchestra!

Having done a fair amount of work to try to get around this problem, I produced a master and set everything up for the release, only to decide on the morning of issue whilst listening in the car that it was no good, and I'd have to go back to the start and re-do the entire 5th Symphony all over again! I hit upon an alternative approach to the equalisation which would preserve the generally excellent results of the earlier master, whilst, I hoped, avoiding the out-of-tune effect. I'm pleased, and somewhat relieved, to report success here, together with my full satisfaction with the entire release. This really is a gem that deserves to be heard once again, and in this release I think you'll agree it's sounding particularly wonderful!

Transfers from the collection of Edward Johnson
XR remastering by Andrew Rose at Pristine Audio, July 2009
Cover artwork based on a photograph of Eugene Ormandy 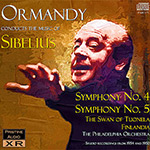 "...As wonderful as it was to meet Sibelius for the first time, it was even more wonderful to have been able to introduce him, some years later, to the members of The Philadelphia Orchestra.  That occurred in June 1955, and there is a rather touching story connected with the meeting.  For some months previous I had been in correspondence with Dr. Ringbom, the director of the Helsinki Philharmonic, in order to arrange for the orchestra to meet the master while we were in Finland on tour.  Sibelius was very ill at the time, very old and fragile and tormented by ear trouble.  The day we were to go to his secluded villa at Järvenpää arrived, and though it was cold and raw and raining, the men were as excited and eager as children.  And I was as excited as any of them.  Imagine my disappointment when Dr. Ringbom called to confess that when he had written to me in Philadelphia to say that everything was arranged he had not mentioned that Sibelius himself knew nothing about the projected visit.  He had only spoken to Mrs. Sibelius, who had agreed at the time but now flatly said no, her husband was too ill to receive us.

There we were, in Helsinki, thousands of miles from home and within twenty-seven miles of Sibelius.  "Dr. Ringbom," I said, "you must not disappoint us.  Please call up Mrs. Sibelius and explain to her that this orchestra, from the very earliest days with Stokowski, has done as much to spread Sibelius' fame as any orchestra in the world.  All they ask in return is to see him."  It worked.

My wife and I were having tea with him, and the orchestra came in two buses.  Even then he hadn't been told that they were coming.  He was so sensitive -- perhaps the most sensitive, shy man I ever met in my life -- that the knowledge that he was to meet 110 musicians would probably have incapacitated him if he were given  too much time to think about it.  And those poor colleagues of mine were standing out in the cold rain with thin raincoats on, waiting!  Finally I took the bull by the horns and said, "Mr. Sibelius, do you know that the entire Philadelphia Orchestra, the orchestra that played your music when nobody else did, is waiting outside, hoping to meet you?  Would you just go out on the balcony and say hello to them?"

"But I cannot speak English well enough," he protested.  "They will not understand me."

"Speak German, they'll understand you.  Just look at them, don't say anything."

And so he got his heavy winter coat and hat -- there are pictures of that visit -- and came out with me.  "Gentlemen," I said, "Mr. Sibelius needs no introduction."  They applauded him and bravoed him until I had to tell them, "Gentlemen, Mr. Sibelius is not well, but he wanted to come out and say a few words to you."  And then he told them, with the beautiful simplicity of his few English words, how grateful he was to them for playing his music so nobly.  At last his oldest daughter pulled him back, saying, "Daddy you're going to catch cold."  Fortunately, he didn't catch cold, but we were worried that he might, for it was bitter that day..."

From Jean Sibelius: A Reminiscence by Eugene Ormandy

As for Ormandy’s Fourth and Fifth, these performances have been well known and highly regarded since their issue. In my survey of Sibelius symphony recordings (Fanfare 30:3) I referred to this Fourth (with apologies for quoting myself) as “fierce, one of the most energetic recordings he ever made; it is also one of the few recordings of this symphony that actually opens ff as indicated.” Readings of the Fourth tend to be either lugubrious or angrily defiant; this one exemplifies the latter type as well as any recording I know. I also cited the Fifth as being “committed and compelling; the first-movement stretto is beautifully calibrated and builds a huge amount of momentum without ever being obvious or crass.”

Pristine’s sonic treatment alters the frequency spectrum of the LPs; there is less top here, but more bottom. The backgrounds are silent, a treat for listeners who remember all too well how noisy the surfaces of 1950s LPs could be. The copy used in this transfer had a couple of pressing flaws in the opening minutes of the Fifth that evidently couldn’t be corrected; ideally, Rose would have had multiple copies to work with.

The tone poems definitely sound their age by comparison to the symphonies; the slight break in tempo and change of pitch that characterized the change of sides at 4:08 in Finlandia—recordings were still being mastered in four-minute segments for issue on 78 and 45 discs—are still audible here. But these recordings sound more lifelike on this CD than on any LP I’ve heard. Because Ormandy re-recorded so much of his repertoire—there are five versions each of Finlandia and The Swan of Tuonela—documentation of this part of his career is far too sparse; as these recordings show, he was a very different conductor in his fifties from his RCA stereo recordings, most of which were made when he was past 70.

So, the Ormandy disc receives an enthusiastic recommendation; the Schmidt-Isserstedt Second is primarily for specialists, or collectors nostalgic for their copies of the LP.