This was the only commercial recording that Guido Cantelli made with the New York Philharmonic, an ensemble which he conducted frequently during his brief international career. It was also the only recording he made for American Columbia, and the original LP labels state that he appeared “through the courtesy of H.M.V.” Despite its importance for these reasons, it has never appeared in a CD reissue*. The present transfer was taken from original grey “six-eyes” label American LP pressings. - Mark Obert-Thorn

(*Since releasing this recording Pristine has been made aware of at least one previous, if limited, CD issue) 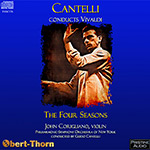