Strauss conducts Strauss - the UK and US recordings, 1922-26

Richard Strauss’s only American recordings were made for the Brunswick label during his concert tour in the winter of 1921-22. Because Brunswick was headquartered in Chicago, it was long assumed that the recordings were made there, perhaps with the Chicago Symphony appearing under a nom de disque for contractual reasons. However, Ross Laird’s Brunswick exhaustive Brunswick discography places the recording venue in New York City. As Strauss’s appearances there in December, 1921 were with Walter Damrosch’s New York Symphony, that may well have been the anonymous ensemble heard here.

The noisier, more distant sound of the Brunswick Salome Dance is indicative of a Pantographic dubbing, which may have been made to bring the playback speed up to 78.3 rpm. (The Bourgeois Gentilhomme disc, recorded at the same session, plays at a lower speed; it is not clear why this, too, wasn’t dubbed.)

The following month saw Strauss in London, making his first British recordings for Columbia with the LSO. A photograph taken during the recording session shows that horn-amplified Stroh violins were not used, which may account for the distant balance of the strings on these discs. Columbia apparently enforced a four-minute limit on 12-inch sides at this time, which required cuts in Don Juan (on Side 2) and in the Otto Singer arrangement of Rosenkavalier Waltzes. The take of the second side of the waltzes presented here appears to be different from the one listed in the Peter Morse Strauss discography and the Ronald Taylor Columbia discography, both of which show Take 2 published for this side.

Four years later, Strauss returned to London to conduct the Tivoli cinema theatre orchestra for the first showing of a silent film adaptation of Der Rosenkavalier. The following day, HMV began recording excerpts from the orchestral arrangement (made by Singer and Karl Alwin) in Queen’s Hall, with the ensemble augmented by additional players, either free-lancers or members of other London orchestras. HMV had been using the new electrical recording technology for a year, but had only recently begun employing it in large halls, rather than in small recording studios, and the results remain astonishingly vivid for this early date.

The sequence of the originally-issued discs placed the side with the Presentation March at the end of the suite, which made little dramatic sense but allowed purchasers to buy the Trio and Finale side as a separate single disc. In this transfer, the sides have been presented in the order they were recorded, irrespective of their place in the opera, except for the Introduction to Act I and Marschallin’s Monologue sides, which were recorded last. (The Presentation March was an earlier composition of Strauss’s which the composer interpolated into the film music for a scene in which the Feldmarschall appears; it does not appear in the original opera.)

The sources for the transfers were American Brunswicks and English Columbias for the acoustics, and a mixture of the best portions of British, German, French and American pressings for the Rosenkavalier Suite.

Producer and Audio Restoration Engineer: Mark Obert-Thorn
Cover artwork based on a photograph of Richard Strauss
Special thanks to Nathan Brown and Charles Niss for providing source material 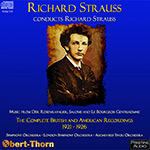