The Lira Panamericana series of radio transcription discs featuring Toscanini conducting Beethoven were largely drawn from his 1944 cycle. However, the Fourth Symphony was not played that year, and NBC included his November 1939 broadcast recording for their South American radio set. Note too that all announcements were cut from these discs.

While this recording of the 4th Symphony has been reissued on a number of occasions, this XR remastering has brought significant sonic improvements to the recording, and offers an almost unbelievable audio quality for any recording of this age. The less-well-known recording of the 2nd Symphony, which we believe has previously been released only on LP, is almost as well-preserved, and this transfer likewise improves considerably on any other heard by this writer.

The 40cm (15.7 inch) diameter vinyl discs used for the Lira Panamericana radio broadcast series are very interesting - and often quite frustrating - from a technical viewpoint. The solution of large discs, pressed in an early but very familiar incarnation of vinyl and rotating at 33rpm was aimed at addressing a number of problems in re-broadcasting recordings in the age before tape, when all recordings were cut direct to disc - normally a 30cm (12 inch) disc rotating at 78rpm.

These discs might, at a real push, be persuaded to accept around five minutes of music, though four was the norm per side. (Later developments in the 1950s saw the likes of Telefunken producing excellent and genuinely hi-fi 78rpm discs with up to 11 minutes per side.) The acetate originals were exceptionally delicate, especially given the heavy tracking weights used at the time. Shellac pressings were equally short, fragile (the discs were to be shipped across continents), and suffered noisy surfaces and poor frequency extensions. Put simply, you'd know immediately you were listening to a pre-recorded item, which is why the Germans' use of their tape technology during the Second World War to broadcast speeches in high quality so confused the Allies - they sounded so convincingly 'live'.

Vinyl solved, at least partially, the noise problem. Slowing the rotation speed down to 33 1/3rpm increased the playing time significantly, but brought with it an additional problem of loss of quality through simple loss of linear velocity. A problem common throughout the 78rpm era was the fall-off of treble towards the end of each side, as the speed of the stylus playing through the grooves diminished enormously at the centre of the disc. A simple solution to this, given the constant angular velocity (or rotational rate) of all records, is to make them bigger - the further away from the centre hole your stylus is, the faster the groove passes below it. (CDs work in the other way round - the requirement for a constant linear reading velocity leads to a variable angular velocity - a CD player spins two and a half times faster when reading the inner part of the disc at 500rpm than its rate at the outer edges, 200rpm.)

The Lira Panamericana discs thus show the beginnings of a new technology, to be unleased in microgroove format in 1948 in the USA, and two years later in the UK, with some technical teething problems (particularly swish) that were still not really ironed out until the mid-1950s. NBC apparently opted for a slightly narrower groove cut than that which a standard 0.0030" 78pm stylus tracks - optimal replay has been achieved with a stylus at 0.0025" radius. Anything larger than this increases swish (already a significant issue, especially at the edges of the discs), anything smaller than this results in a much reduced and distorted replay signal. Mono microgroove stylii had a radius of 0.0010", their stereo cousins an even narrower 0.0007" - clearly stylii were getting smaller in 1944, but they had some way yet to go.

I've touched on swish. This has proven to be very variable across the records, and often the left groove wall has also proved generally much quieter in replay than the right. This could be a result of damage and wear from very heavily-tracked stylii designed more for shellac in mind than the comparatively delicate vinyl. There is often a significantly extended frequency range to be found on these discs, though in some cases this appears obvious only in louder passages. It's also clear that a degree of volume-level compression was in use, something it's just about impossible to undo. That said, it is clear that the Lira Panamericana series of records can and do offer much for the modern restoration engineer to work from, even if they are somewhat more variable in quality than one might ideally wish for!

Toscanini began a "Beethoven Festival" series of NBC broadcasts later in the autumn of 1944, and these were also recorded for special distribution to South American radio by NBC - specially pressed on outsized 15.7" vinyl discs, cut at 33rpm but using wide-groove 78rpm cutters, each side could hold around 15-20 minutes of music with an extended frequency range significvantly higher than that expected of standard commercial 78rpm discs at the time.

A near-full set of Beethoven's symphonies was assembled (excluding the 9th) from this series (topped up with earlier recordings of the 4th, 5th and 6th), together with recordings of three Piano Concertos, plus various overtures and chamber music transcriptions.

Transfer and XR remastering by Andrew Rose at Pristine Audio, June 2009
Cover artwork based on a photograph of Arturo Toscanini 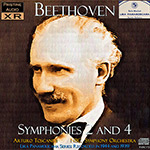