Newly transfered and restored from the only known disc copy

Among the many concerts given by Toscanini that one might have wished to hear, the performance of Brahms' Second Piano Concerto given with Horowitz at New York's Carnegie Hall on the evening of Monday 19th February 1945 must rate highly on many people's most-wanted lists. Concert flyers printed in advance show that the original plans for the first half of the evening were changed - the Mendelssohn and Beethoven originally programmed were replaced by Weber's Overture to Die Freischutz and the Brahms Piano Concerto No. 2 now released - and the only known recording to survive from this concert.

Rumours of a recording...

As with a number of the Maestro's unbroadcast concerts with the NBC Symphony Orchestra there have long been rumours of the existence of a recording of this performance, often coupled with speculation as to quite how good it might have been. Was it really even better than their 1948 NBC concert performance? Or the official 1940 Carnegie Hall 'studio' recording?

It seems the answer lay in the grooves of a single disc, acquired many years ago, with the financial help of family and friends, by Christophe Pizzutti. He managed to get a poor-quality transfer of the recording made, with the hope of finding an outlet for it, but to no avail - a number of record companies were approached but declined to investigate further.

Journey of a lifetime

Then, earlier this year, Mr. Pizzutti contacted Pristine Audio and let us know not only that he had this near-mythical disc in his possession, but that he would be delighted if we could carry out a new transfer and full XR restoration for issue through Pristine Classical. And so I set off across France - some 300 miles over the Massif Central, through the extinct volcano range of Puy and through stunning scenery as I drove up to a mountain highway running some 1000m above sea level, and then down and onwards towards the historic city of Lyon; an exhilarating drive, circling the 1,458m of the Puy de Dôme before descending down towards Clermont-Ferrand, then climbing again as we headed towards the Rhone Valley on a route which could ultimately have taken us on to Swiss border and the Alps - in order to take temporary care and possession of this priceless disc.

And so, here it is. Unlike the poor transfer copy which has recently had limited circulation in certain circles, there are no skips; the only things missing here are the clicks from the delicate and slightly damaged (in places) acetate surfaces! It's a fine performance - though I'll leave the comparisons to the real experts - captured in an often excellent sound quality that's occasionally a little frayed around the edges, which is only to be expected under the circumstances. My great thanks goes to Christophe Pizzutti for allowing me the honour of helping preserve this unique document.

About This Transfer - technical notes and impressions

On my return from Lyon I immediately set about the transfer of the disc. First up was a very careful but thorough clean of both surfaces, using imported record-cleaning fluid from The Disc Doctor, coupled with medical-grade purified water and Pristine's custom-made vacuum cleaning/drying system. The disc was replayed using a Benz Micro cartridge, with a custom re-tipped truncated-elliptical Paraglide diamond, ground specifically by Expert Stylus in the UK for optimum replay of mono vinyl discs, via a Musical Fidelity pre-amplifier directly connected to our 24-bit studio DACs. The combination of a good deep clean and a well set-up .0011" stylus not only allowed the best possible reproduction of the recording, but also the correct tracking of two areas of a disc which had previously skipped on playback, causing short sections to be lost.

The disc surface varied considerably, and it was clear that this 33rpm disc had originally been held on other discs, four in total, suggesting outsized broadcast transcription discs, one side for each movement. Thus each movement exhibited slightly different technical problems to be overcome - the first was plagued by swish for the first 3-4 minutes, and increasing hiss towards the end; the second was much better, though some faint applause audible at its end was quickly faded (the obvious applause of the first movement was, likewise, faded out); the third movement was largely clean, but had suffered some more general deterioration, leading to an impression of slightly fluttery mild dropout in places, though generally it was quite good; the finale, heard in our example here, was perhaps the best of the four - some surface noise apparent at the start was quickly left behind, and the main issue to deal with here was peak distortion from Horowitz's crashing piano chords. Fortunately the end of the third and start of the fourth movement recordings overlapped, and I was thus able to edit the two together and restore full continuity exactly as heard on the night of the concert.

For much of the restoration, following declicking, equalisation and digital noise reduction, a note-by-note approach was taken, with the careful and painstaking reduction of noise and distortion present between the harmonic frequencies of the notes being played using the latest digital spectral repair tools. Extra-special care was taken with this to ensure that nothing was lost of the music present on this incredibly rare and important recording, and I believe this release represents the peak of what is possible to achieve with a recording such as this using current available technology. We have of course retained a completely untouched transfer at 32-bit resolution - should future technological advances suggest further improvements might be possible, these can be tested without the need for another replay of the delicate acetate grooves of this record.


Source disc from the collection of Christophe Pizzutti:
Transfer from the only known acetate disc copy

Transfer and XR remastering by Andrew Rose at Pristine Audio, June 2009
Cover artwork based on the photograph of Toscanini and Horowitz used for the concert flyer 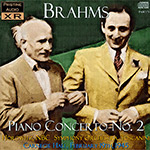 The performance takes on a kind of furious intensity ... this release may well command interest for pianists or anyone concerned with Toscanini

This 1945 Brahms Concerto marks the third live collaboration between Toscanini and Horowitz to appear on CD, the two others being one from 1940 (Carnegie Hall, Naxos deleted) and 1948, (studio 8H, Music & Arts or Pristine ). It was part of a benefit concert that included the Overture to Weber’s Der Freischutz, Ravel’s La valse, and Mussorgsky’s Pictures at an Exhibition. In discussing this performance, producer and transfer engineer Andrew Rose speaks of the sound as being “a little frayed around the edges.” Although fairly good in terms of timbral accuracy, at least for its time, it is often disturbingly out of balance, the piano (and third movement’s solo cello) sounding oppressively close, often making Horowitz sound less like pianist and more like a banger. (A reproduction of one of the discs used for this transfer bares the Toscanini AT logo, suggesting it was produced privately for the family.) With tempos that are often faster than in any of the other surviving Horowitz/Toscanini collaborations in this work, the performance takes on a kind of furious intensity that, even in the stormy second movement, may well prove irritating. But it certainly didn’t irritate the audience, each movement generating applause, which, at the end of the first one, actually begins before the last chords are completed. If not for everyone, this release may well command interest for pianists or anyone concerned with Toscanini. But both artists are better served in their 1940 RCA recording or 1948 broadcast.