Toscanini's relationship with Beethoven's Fifth Symphony during World War Two was very interesting. He had conducted it at an all-Beethoven concert with the NBC Symphony Orchestra on the symbolic date of 11th November, 1939, exactly 21 years after the signing of the Armistice which ended the fighting of World War I. Although during a South American tour he twice programmed the work - in Rio de Janeiro in July, 1940 (1st and 8th) - once the United States of America entered the Second World War, Toscanini stated an intention not to broadcast the work again in full until the war was over (a 1942 New York Phil. performance was not transmitted).

Thus, during a special, unscheduled NBC concert of 9th September, 1943, Toscanini marked the downfall of Mussolini with a performance beginning with the first movement only from Beethoven's Fifth. This was doubly symbolic - marking an especially significant event during the war for the avowed anti-Fascist maestro, while also indicating that victory was as yet still incomplete.

The Fifth Symphony was probably not heard again under Toscanini's baton on US radio until a special half-hour concert, entitled Victory Part II, on 8th May 1945, when he marked the final defeat of Germany and the end of World War II in Europe with a full performance of this work alone. (Victory Part III, VJ day, featured the 'Eroica' Symphony.)

However, Toscanini did conduct the NBC Orchestra in the Fifth Symphony during 1944, at a special Tuesday-evening Carnegie Hall concert to promote the sale of War Bonds. Mortimer H. Frank notes of this concert:

"Six and a half million dollars were raised from this exceptionally long program, which the New York Times critic Olin Downes called 'gigantic'. It is not clear how much, if any, of it was broadcast: NBC's records claim that Tchaikovsky and Beethoven were aired, but the New York Times does not confirm this in its listings of broadcasts for this date."

It is clear from the history described here that Beethoven's Fifth was especially symbolic for Toscanini during wartime, and it is therefore of little surprise that we find what some regard as perhaps his finest-ever performance in this hugely significant concert recording.

Toscanini began a "Beethoven Festival" series of NBC broadcasts later in the autumn of 1944, and these were also recorded for special distribution to South American radio by NBC - specially pressed on outsized 15.8" vinyl discs, cut at 33rpm but using conventional wide-groove 78rpm cutters (i.e. not microgroove), each side could hold around 15-20 minutes of music with an extended frequency range significvantly higher than that expected of standard commercial 78rpm discs at the time.

A near-full set of Beethoven's symphonies was assembled (excluding the 9th) from this series (topped up with earlier recordings of the 4th and 6th), and it appears that a rather rough 78rpm acetate copy of this earlier 5th Symphony was inserted to make up the set. No other transcription is known to survive - a rough transcription circulating on MP3 format of this recording exhibits clicks which indicate it is almost certainly an nth-generation copy of the same acetate master - possibly even sourced from the South American broadcasts themselves.

This transfer was taken from the only known source for this Symphony recording: NBC's Lira Panamericana 40cm vinyl radio transcription discs, Nos. 68B and 69B, Matrix Nos: ND5-MM4343-1 and ND5-MM4545-1 - a series of 33rpm wide-groove discs prepared for South American radio reproduction during 1944. Only two sets of these are thought to survive.

Sonic evidence suggests that our source recording was originally prepared from now-lost 78rpm acetate discs of the (probably) unbroadcast concert. Although vinyl noise levels were reasonably low on this disc, there was considerable surface noise from the acetates evident on the source, which at times has compromised aspects of the sound quality.

Transfer and XR remastering by Andrew Rose at Pristine Audio, June 2009
Cover artwork based on a photograph of Arturo Toscanini 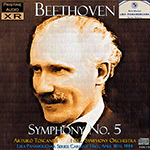 For Toscanini admirers, it is a must acquisition

The 1944 performance of the Fifth Symphony has, so far as I know, never appeared anywhere before. It was the last of three works on a gargantuan Carnegie Hall gala that raised $6,500,000 in War Bond sales. Preceded on the program by the Brahms First Symphony and the Tchaikovsky “Pathétique,” this Beethoven Fifth should be heard by anyone interested in either Toscanini or the work itself. In some respects, it is unlike any of his surviving accounts of the score, fleeter than in his live 1933 New York Philharmonic concert (available outside the U.S. from Naxos), yet more expansive than in his last 1952 NBC telecast (available on both an RCA CD and Testament DVD). Moreover, it boasts slightly greater flexibility in its occasional rhetorical emphases absent from his other accounts, distensions that in no way violate the music’s line or structure. One might object to the omission of a first-movement repeat and to a single CD containing only 28 minutes. But these are white-hot minutes infusing the work with a life it is rarely granted. The sound, of course, is an issue. It is, to be sure, a bit grainy, scratchy, and occasionally distorted in the loudest passages. But it benefits from a surprisingly wide dynamic range and a welcome Carnegie Hall ambiance that is free of the boxy deadness that afflicted Toscanini’s 1939 studio recording of the score. In short, this is a fascinating release that adds dimension to the Maestro’s profile. For Toscanini admirers, it is a must acquisition.