Plus possibly his finest Schubert 'Unfinished' - all sounding superb 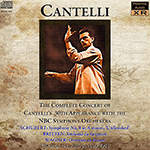 Guido Cantelli gave 40 concerts with the NBC Symphony Orchestra which was more than any other conductor apart from his mentor Arturo Toscanini.

What hits the researcher time after time is the very few occasions that Cantelli actually conducted standard works of the orchestral repertoire and here is a typical example. The young conductor performed the ‘complete’ Schubert Unfinished in concert just four times (the reason for remarking on ‘complete’ is that Cantelli conducted only the first movement in two concerts with the Orchestra Novarese in 1944) and this was his last public performance. His next work on the symphony was when he made his commercial recording (one of his few in stereo) in August 1955.

The writer’s view is that this broadcast performance is unquestionally the finer. The two movements are marked Allegro moderato and Andante con moto. Cantelli, as far as is known, never included the exposition repeat in the first movement in his few public performances and it certainly is not present in the commercial recording.

The commercial recording is, of course, refined but it is as if the con moto is missing and we are left just with an Andante and in this respect the performance with the NBC Symphony Orchestra is the better even if it is monaural while the studio recording is stereo.

However, the significance of this concert is that it preserves a performance of the only work that Cantelli conducted by an English composer. And what a performance! Cantelli’s first two performances of the Sinfonia da Requiem were with the Orchestra della Scala in June 1952 and this was followed six months later with this performance with the NBC Symphony Orchestra: his final three performances were with the Philharmonic-Symphony Orchestra of New York (which had given the première) on 22, 23 and 24 March 1956. Note that even though the music of Britten was being regularly played in the United Kingdom Cantelli never conducted this work with the Philharmonia Orchestra: just why is difficult to fathom. Was the concert impresario afraid that it would have a detrimental effect on ticket sales? This was hardly likely as Cantelli’s concerts were invariably sold out. Coincidentally, it was with the (New) Philharmonia Orchestra that Britten made his second recording in December 1964.

Britten had been commissioned by the Japanese Government to compose a work to celebrate the 2600th anniversary of the Japanese Empire. Not surprisingly, the composition (which was dedicated to the memory of Britten’s parents) was not considered to be celebratory and was rejected but Britten, who was living in America at the time, was allowed to retain the commission which he (had already) spent on a Model T Ford. Barbirolli and the Philharmonic-Symphony Orchestra of New York gave the première of the Sinfonia da Requiem on 29 March 1941. Britten considered at the time that “it was given very well”. In the following October the composer met Serge Koussevitsky who had been sent a score by the publishers since he was interested in giving a performance with his Boston Symphony Orchestra. Britten sent him the Barbirolli recording (taken from the second performance on 30 March and obviously an inferior air check) but also pointed out that he now found ‘some of the speeds unsatisfactory – the first and last movements being too slow, and a bad slow up in the middle of the 2nd movement.’ The first Koussevitsky performances took place on 2nd and 3rd January 1942 in Boston and there were further performances in New York in February. It was at this time that Koussevitsky commissioned an opera from Britten – which was, of course, Peter Grimes!

The Sinfonia da Requiem was the first orchestral work of Britten’s to achieve international recognition and it was interesting to discover that Celibidache was playing the work during his tenure with the Berliner Philharmoniker. Cantelli’s performance is remarkably similar to the Britten.

As indicated above this was only the third time that Cantelli had programmed the work but it is already clear that he had a better grasp of the musical content than Barbirolli.

For the final work in this concert Cantelli conducted Wagner’s overture to Rienzi. Unlike the previous compositions in this programme this was  a core work and was included in 30 of Cantelli’s concerts, the first being on 11 April 1946 and the last 31 January 1954.

Cantelli obviously had a penchant for the overture (he conducted it more often than any other Wagner composition in his repertory and gave three performances with the NBC Symphony Orchestra,  only that of 1954 not appearing on CD – as at March 2008 – although it was included in the Cantelli Legacy LPs issued by the Arturo Toscanini Society. Curiously enough, during all the years that Toscanini worked in America he only once programmed this piece

Szell recorded this overture twice but both his well-recorded performances are marred by inapt rallentandi. This Cantelli performance – possibly his best – is well enough played but, as usual, when one comes to consider the performance by Toscanini one is made aware for the umpteenth time of myriad details of a score – and do not forget that this was his sole performance while in the USA – which others miss. Was it not Malcolm Sargent who remarked to his companion at a pre-war rehearsal in the Queen’s Hall with some puzzlement ‘He doesn’t do anything’: but he does, and no mistake! In Rienzi he ensures that the strings are playing (and that the listener is made aware of) the fortissimo at bar 50 and 51 onwards: later in bar 68 he emphasizes the rising figure of quavers (eighth notes) without resorting to a rallentando as Szell does. He does this sort of thing time and time again and the miracle is that the details do not impinge on the concept as a whole. The overture may usually be considered to be a rough and tumble affair but not with Toscanini: one should be grateful that the performance was officially issued in the series ‘Great Conductors of the Twentieth Century’.