First in a new series of Cantelli NBC concerts

Keith Bennett, whose new book Guido Cantelli - Just Eight Years Of Fame is published to co-incide with this release, was my introduction to the short-lived musical world of Guido Cantelli. His ceaseless championing of Cantelli has resulted in a number of releases on various record labels including Pristine, and it's now an immense pleasure to be able to delve into Keith's extensive and meticulously- maintained collection of rare taped recordings for this new series of issues.

ROSSINI Overture to The Siege of Corinth
TCHAIKOVSKY Symphony No. 6 in B minor, 'Pathétique'

Transfer tape from the collection of Keith Bennett
Transfer and XR remastering by Andrew Rose at Pristine Audio, May 2009
Cover artwork based on a photograph of Guido Cantelli 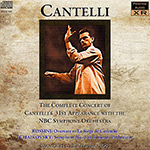 Commentators often refer to Guido Cantelli’s good taste but there are a few occasions when that attribute deserts the conductor. Such instances which come to mind are the saccharine arrangement by Molinari of the Largo from Handel’s Xerxes and Wagner’s overture to Rienzi and to those could be added this overture by Rossini. This is a potboiler of an overture (and that is being charitable – some have deemed it trashy fifth-rate music) which Cantelli included in his first appearance with the Orchestra della Scala at an open air concert on 27 July 1945 and he gave 32 performances in all (the only Rossini overture to be programmed more often was Semiramide). After the solemn opening it rapidly deteriorates in musical substance and becomes merely rumbustious. Small wonder that Toscanini did not share his younger colleague’s enthusiasm: he gave a couple of performances with the Philharmonic-Symphony Orchestra of New York in 1931 but none were programmed with the NBC Symphony Orchestra although he did make the studio recording. Cantelli’s performances with the NBC Symphony Orchestra (there was another with the orchestra on 1 January 1951) easily outclass his commercial recording with the Orchestra Stabile dell’Accademia Nazionale di Santa Cecilia both in terms of performance and actual recording quality. But what a pity that the Cantelli performance of L’italiana in Algeri on 7 April 1954 was not broadcast to add to the conductor’s discography.

Tchaikovsky: Symphony in B minor, No.6, Op.74, Pathétique

There are instances when the tragedy of Cantelli’s brief career registers with overwhelming force and this is one of them. Cantelli performed this symphony on just six occasions and it is worth a moment’s thought that Karajan made more commercial recordings of this symphony (seven) than Cantelli gave actual performances. Cantelli first conducted the symphony on 27 July 1945 at an open air concert during his first appearance with the Orchestra della Scala and his last was this performance with the NBC Symphony Orchestra on 21 February 1953 on this CD. His previous concert performance was with the Philharmonia Orchestra on 14 October 1952 which was followed by four three-hour session on 24, 28 and 30 October for the commercial recording. As might be expected, with so short an interval between the commercial recording in London and the concert performance in New York, there is little to choose between them.. Cantelli fully understands the emotional implications of the score which he conveys without resorting to exaggerations: the demands of expressiveness are met without hysteria, tempi are well-judged in all four movements, and the harrowing despair of the final movement is admirably portrayed. All this is true of the live performance with the NBC Symphony Orchestra.

However, the writer would like to make some reference to Toscanini’s concert performances with the NBC SymphonyOrchestra. Some commentators have expressed the view that Cantelli was a Toscanini clone and when it comes to the two works of Tchaikovskythat the Maestro and Cantelli both performed – this symphony and the Romeo and Juliet Fantasy Overture – one can understand how that assessment came into being because the performances are remarkably similar, both purge the compositions of exaggeration and sentimentality, which is definitely preferable to those performances with over-stated dynamics coupled with inappropriate over-romanticizing. But readers should also remember that Toscanini thought Tchaikovsky’s Symphony No.5 was banal and this was a work for which Harris Goldsmith coined the expression of Cantelli’s ‘calling cards’ (he performed it on 28 occasions). Would a clone have done that in view of his mentor’s strongly held view?