A truly excellent Fourth from Rubinstein and Beecham

"So far as I am concerned, nobody need bother to record this concerto again : this performance is it !" - The Gramophone

As transfers and restoration go, this was a delight from start to finish. A good, clean, near-mint set of 78s exhibited very few of the characteristics for which the medium is often notorious - what little swish was occasionally evident was simple to remove; the frequency range was full and tonal balance good; surface noise was limited to some easily-removed crackle and relatively low hiss; there was not a scratch to be found.

What I have been able to do is bring the very latest remastering technology to bear on this recording: XR remastering reveals a slightly fuller-bodied recording with finer natural reverberation than was immediately apparent; new advances in digital noise reduction techniques allow for greater-than-ever suppression of background noise without audible damage to the musical content; Ambient Stereo processing gives the whole recording an even greater sense of realism; side joins are seamless - the only possible giveaway is an occasional hint of end-of-side distortion and treble roll-off.

In short, for much of the time this sounds like a very slightly hissy recording taped in the 1960s or 70s, rather than captured on 78s in the 1940s. It's a really excellent performance, perhaps marred for some by the unusual use in the first and third movements of Saint-Saëns' candenzas, and it sound fabulous!

Transfers and XR remastering by Andrew Rose at Pristine Audio, May 2009
Cover artwork based on a photograph of Arthur Rubinstein 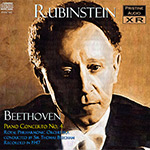 Rarely, rarely as comes the spirit of delight, there is the infrequent occasion which makes the reviewer's life really worth while : such an occasion is the issue of this recording. I cannot remember a finer or more deeply satisfying performance of this great concerto, one which more effortlessly overcomes every obstacle and in which every detail is so meticulously polished and so absolutely right. The recipe is simple enough : take a soloist and a conductor who, besides being personalities as well as great artists, are entirely en rapport, add a first-rate orchestra of alert musicians, give them all enough time to rehearse thoroughly, finish off with a recording engineer who secures the right balance between piano and orchestra, and who captures the lustre of the orchestral playing —and you get a masterpiece, like this. (I should like to feel that everybody concerned in the Columbia set I reviewed in July will listen to this issue.)

Throughout these discs there is this feeling that two personalities are pulling together, each inspiring the other. The orchestral playing is never allowed to become just an accompaniment, but is full of life (notice, as one instance only, the basses in bars 55-58). Phrasing is beautifully modelled, the rhythm is admirably taut (listen to the second subject of the first movement), and the perfectly-controlled string dynamics at the end of the Andante are most moving. Rubinstein's cadenzas, which are new to me, are entirely acceptable in style, though that in the first movement is over-long.

So far as I am concerned, nobody need bother to record this concerto again : this performance is it !

The music sparkles under his lithe and graceful touch

Recorded in 1947 at the Abbey Road Studio in London, this recording has been skillfully remastered by Andrew Rose. Both piano and orchestra sound vivid and clear, and Rubinstein, age 60 at the time, is in top form technically. It is always a pleasure to hear this pianist of pianists, even with minor caveats.

Although he was a master of the Romantic style, Rubinstein’s conception of the first movement (in fact, the whole concerto) anticipates the “historically informed” movement, with rather brisk and business-like tempos and little lingering over phrasing. His use of the sustaining pedal is restrained, and the sparkling clarity of his passagework comes across delightfully. He elects to play the Saint-Saens cadenzas for both the first and third movements: the former is quite lengthy (and a bit bizarre in the context of a Classical concerto), exhibiting both full-blooded Romantic feeling and bravura style. The slow movement is very expressive, with the piano more responsive to the lyrical content, serenely answering the orchestral outbursts. In the Rondo finale, Rubinstein’s tempo is one of the fastest on record—it takes 8: 50 (including the brief Saint-Saens cadenza). (Arrau, known for his rather stately tempos, needs close to 11 minutes, and most of the other pianists available for comparison [Schnabel, Kempff, Pollini, and Zacharias] take over 10 minutes.) Yet Rubinstein only occasionally sounds as if he is rushing, and here again, the music sparkles under his lithe and graceful touch.

Beecham follows Rubinstein congenially, and there is a fine balance in sound. Although Rubinstein is not my first choice in Beethoven interpretation, one can appreciate his sheer joy in making music. Rubinstein’s zest for living enriched his playing, and he communicated it vividly to his audience.