The recording here of Mozart's 27th Piano Concerto came at the end of Rudolf Serkin's first brief tour of the USA as a concert soloist - the entire tour lasted just two weeks and culminated in three concerts at Carnegie Hall with Toscanini, in his final year with the New York Philharmonic Symphony Orchestra.

The Toscanini concerts featured Serkin playing first the Beethoven 4th Concerto and then the Mozart. The third of the three concerts was broadcast, and an almost-complete acetate disc recording has survived of this historic performance. We were able to source a high-quality tape copy of these discs, though alas the quality of the tape does little to improve the damage done to the discs over the years.

The restoration of this recording presented me with one of the greatest challenges so far in my career. Such were the obstacles and the slow pace of work that I frequently considered stopping and moving onto something else. However, this is not only a most important historical document, but also a particularly fine performance, and for both of these reasons I perservered.

In addition to numerious very heavy clicks and electrical interference, a large portion of the music, especially through the second and third movements, was heavily compromised by repeated, distorted disc damage, cutting right through the musical frequencies to the point of near-obliteration. Such was the nature of this incredibly intrusive and unpleasant noise that it occupied for the most part a near complete revolution of the original disc, thus making listening a very uncomfortable experience, especially through the quiet second movement:

I have attempted, using the most up-to-date digital computer methods available, to repair as much of this damage as is currently possible. All too often the simple removal of noise reveals little or nothing below, and one is forced to dig deep into the sound patterns to try and find traces of individual harmonics so as to rebuild the sound of the piano and orchestra.

The recording was also missing several sections of music. One begins six bars before the cadenza at the end of the first movement, and runs partway into that solo section. Others are briefer and occur during the finale when orchestra and soloist were playing together. I was able to merge in another more recent recording, sonically treated so as to mimic the sound of the Serkin/Toscanini, and these have filled those gaps remarkably convincingly (almost to the point of being undetectable) in the last movement. However, such is the nature of the cadenza, where one is listening specifically to a display of personality and virtuosity on the part of the soloist, that I decided not to attempt to patch this section, and the listener will hear a small jump toward the end of the first movement as a result.

The 29th Symphony carries with it the hallmark acoustic of NBC's somewhat notorious Studio 8H, which I do not find as sympathetic to the orchestra as that of Carnegie Hall, even when filtered through the kind of damaged discs heard here in the Piano Concerto. However, it is an excellent example of Toscanini's Mozart, where the use of a slimmed-down orchestra was very much ahead of its time.

"...the performance is, for its time at least, a revelation. One has only to compare it to other commercial recordings of the work then available - one made by Serge Koussevitzky, the other by Beecham - to recognize how Tosacnini's approach, in its lightness, transparency, and unaffected simplicity, comes far closer to modern scholarship's view of Mozart than the waywardly heavy-handed style of Beecham or the livelier but thicker-textured reading of Koussevitzy..."

Transfers and XR remastering by Andrew Rose at Pristine Audio, April-May 2009
Cover artwork based on a photograph of Arturo Toscanini 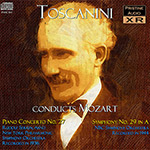 Neither of these performances is new to CD, the Symphony having been issued in a now probably scarce Grammophono disc, the concerto in a two-CD Guild set (sold only outside the U.S.) that preserved the entire concert of February, 23, 1936, from which this Serkin performance was drawn. It marked his debut in the U.S. as soloist with symphony orchestra and also featured him in the Beethoven G-Major Concerto. This transfer of the Mozart derives from the same air-check used by Guild, and thus is missing part of the first movement—a loss that begins shortly before the tutti that precedes the cadenza and extends into part of the cadenza itself. The sound of this transfer, in its presence and impact, is slightly superior to Guild’s. But, though thoroughly listenable, it remains markedly inferior to the studio norm for the period. That said, the performance should prove fascinating for anyone interested in the artists, especially Toscanini. It is certainly unlike the conductor’s 1943 NBC performance of the work with Horszowski (once available from Naxos). Sometimes that later one even approaches glibness. By contrast, this 1936 collaboration with Serkin boasts greater breadth and flexibility from both conductor and soloist. But, unlike the 1943 performance, it does not contain an addition of seven measures in the opening tutti that Toscanini inferred to be missing in what was then the standard (but corrupt) edition. Ultimately, Serkin, who gained access to Mozart’s manuscript, confirmed what had been only a suspicion on Toscanini’s part. Today, these seven measures have become standard. Clearly, several limitations, sonic and textual, limit the appeal of this release. Nevertheless, it is a significant document of a memorable collaboration in a work that was Toscanini’s favorite Mozart concerto.

The Symphony No. 29 is another matter. In his notes for this release, producer Andrew Rose cites my Arturo Toscanini: the NBC Years, where I noted that the performance is a “revelation for its time” when compared to the recorded accounts of the work made by Koussevitzky and Beecham. This is certainly true in terms of its lean sonority and freedom from overly broad tempos. But on hearing it again, it also sounds under rehearsed and graceless. It is certainly interesting as Toscanini’s only surviving account of the work (I suspect it may be his only performance of it), but it falls short in terms of projecting the music’s elegance, buoyancy, and charm. The sound, if certainly superior to that of the Concerto, is rather shrill and raucous. Reservations aside, for those who want a fascinating walk into history, this is a welcome release. A few of the CBS broadcast announcements frame the concerto.

This article originally appeared in Issue 33:1 (Sept/Oct 2009) of Fanfare Magazine.