This release is the first of four which will present the complete recordings of Alfred Hertz and the San Francisco Symphony Orchestra. Hertz was an important conductor during the early years of the 20th century, both in Germany, where he led the Berlin Philharmonic in their first recordings (Naxos Historical 8.110049-50; Berliner Philharmoniker BPH 06 01) and at the Metropolitan Opera in New York, where he earned the enmity of the Wagner family by breaking the ban on staged performances of Parsifal outside of Bayreuth.

Between 1925 and 1928, he recorded extensively for the Victor Talking Machine Company with the San Francisco Symphony, whose music director he had become in 1915. Despite his notoriety, none of these recordings has ever been reissued on CD; and indeed, only one (the Tristan Prelude) was ever available on LP – and that only on a limited release from the Met.

For the current Pristine release, all the sides were taken from mid-1930s Victor “Z” shellac pressings, the most quiet form of issue, except for the Marche Militaire. By the time this was released on “Z” pressings, the original matrix had been replaced by a sonically compromised dubbing. However, the original, somewhat noisier “Orthophonic” pressings contained the undubbed side, and that is presented here in order for the recording to be heard in greater detail. (The last side of the Leonore Overture was only ever available in dubbed form, however.) I have also taken pains to correct the pitch fluctuations that plague all of the 1927 sides.

Producer and Audio Restoration Engineer: Mark Obert-Thorn
Special thanks to Don Tait for lending the undubbed take of the Marche Militaire
Cover artwork based on a photograph of Alfred Hertz 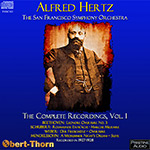