Celebration of an association with the orchestra dating back to 1887

HIstoric recordings can be so-called for at least two reasons - the one more commonly used is simply a reference to the age (and often the perceived sonic inferiority) of an older recording. But the second use of the term implies something particularly special, be it the nature of the performance or, perhaps more correctly, the nature of the event.

It would be impossible not to consider Toscanini's final concert with the Orchestra of La Scala as historic. He had joined the orchestra as a cellist in 1887, participating that year in the première of Verdi's Otello under the composer's baton and immediately making an impression. He soon graduated from the ranks of the orchestra to the podium, and was to serve two lengthy engagements at principal conductor between 1898 and the end of the 1920s.

He would return to conduct the orchestra on a number of occasions following the end of the Second World War, though as time wore on these became increasingly rare occasions, and this final concert of 1952 was the only one he conducted with the orchestra that year. As with his final NBC concert, it was an all-Wagner affair.

The concert was broadcast in full by Radio Italy, and almost all of that broadcast was recorded onto disc from the AM radio transmission. Whilst the radio reception is excellent, with no audible interference or cross-talk, the frequency response from such a transmission is poor, and greatly compromises the sound quality available here.

To our knowledge there have been two previous issues of this concert on CD. These ranged in sound quality from poor (the one we've heard) to dreadful (according to reports). We are lucky to have in our tape collection a transfer of the original discs onto high quality open-reel tape which surpasses in quality that of the better of the two previous CD issues, albeit by a rather narrow margin. Thus we have an excellent base from which to start.

We have also been able to apply XR remastering to the recording, something which has allowed us to transform the murky sound quality into something far more enjoyable. Our analysis showed a steep roll-off in the frequency response of the entire treble range between 2kHz and 5.5kHz (the point at which the narrow range of the broadcast cuts off the top end completely). By restoring this range to its original and correct level, as well as tackling other anomalies lower in the tonal spectrum, an instant and dramatic improvement is achieved.

We have also been able to look at a number of other factors. At the start of the concert one perceives something of a panic from either the radio engineer or the recording engineer, as the volume levels are wrenched violently down following the first chords, then rather coarsely manipulated until a satisfactory level is found partway through the first piece. This has been evened out. Elsewhere hundreds of the kind of flaws which creep inevitably onto a delicate acetate recording after even one or two plays have been either entirely corrected or greatly reduced.

The pitch of the recording has also been corrected, and we've paid attention to disc side changes in order to create as continuous a flow as possible.

After much agonising it was decided that, as a consequence of the historic nature of this broadcast, the entire programme would be preserved here. This does include a lengthy introduction in Italian - which I personally do not speak or understand - which seems to go on and on until the announcer finally runs out of steam. A minute or so's silence from him is filled with the sound of the audience coughing and the orchestra endlessly tuning up, which we've omitted.

Thus those who either understand Italian, or simply enjoy the sound of the language, can sit back and hear the full transmission as broadcast on 19th September 1952; those who would rather get straight down to the music are recommended to skip straight to track 2. Either way it's a splendid occasion, with a wildly ecstatic audience, and some marvellous moments. We've chosen a lengthy sample so you can fully gauge both the quality of the sound and the performance - the full 18 minutes of the reflective Siegfried Idyll - which we hope you will enjoy as much as we do.

Technical note: This recording was made from a frequency-range-compromised AM radio broadcast onto acetate discs. This transfer was taken from an excellent 1/4 " tape transfer of original discs. Note that some applause runs short due to disc side changes - we have preserved as much of the broadcast as survives, including the lengthy Italian spoken introduction, though omitting a minute or so of audience noise when the announcer had presumably run out of things to say. After much agonising it was decided to retain the original introduction in full; we hope our Italian-speaking friends will enjoy it, and suggest that if you cannot follow spoken Italian you begin your listening at track 2.

Transfer and XR remastering by Andrew Rose at Pristine Audio, May 2009
Cover artwork based on a photograph of Arturo Toscanini 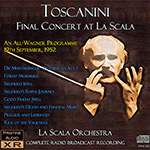