Among the finest Prokofiev performances ever recorded

These rare recordings came up for review as part of a look at the world of "Private CDs" by Robert Stumpf II at Classical Net Review a few years ago, and in reading them one is immediately struck by his enthusiasm for both recordings:

...but the whole thing is worth it just for the Prokofieff. This was recorded whilst the Maestro was on tour in the USSR and is one of the most intense recordings ever. It is my favorite and I am glad to have it on CD...
(On the 5th Symphony)

...Again, the Prokofieff makes this a must have disc. Taken from the LP issued several years ago by the NYPO this is the finest performance there is. The orchestra is inspired and the sound is excellent...
(On the 6th Symphony)

Whilst I would dispute the sound quality of the 6th Symphony, at least in its original incarnation (we were sent 1/4" tape transcriptions of the acetates from the archives of the Stokowski Society which are surely as good as anyone else is likely to get), it's certainly hard to argue against the general thrust of Stumpf's enthusiasm for both of these, and it's a mystery as to why Stokowski did not programme them more often.

As the Society's Edward Johnson pointed out to me in his letter accompanying the masters, "Stokowski gave the US Première of the Prokofiev 6th in 1949, and conducted it four time altogether - on 24, 25 and 26 November and again of 4 December. This last performance was broadcast [the recording now issued]. It was also the last time he conducted it! He only conducted No. 5 again one more time - in 1967 with the American Symphony Orchestra."

Mr. Johnson also enclosed notes by Stokowski on the 6th Symphony, written for the Philharmonic program:

Prokofiev's SIXTH SYMPHONY is a natural development of his immense musical gifts. It is in three parts - the first moderately quick, the second slow, the third very animated. The first part has two themes - the first in a rather fast dance rhythm, the second a slower song-like melody, a little modal in character, recalling the old Russian and Byzantine scales. Later this music becomes gradually more animated as the themes are developed, and after the climax of this development there is a slower transition to the second part. I think this second part will need several hearings to be fully understood. The harmonies and texture of the music are extremely complex. Later there is a theme for horns which is simpler and sounds like voices singing. This leads to a warm cantilena of the violins and a slower transition to the third part, which is rhythmic and full of humor, verging on the satyrical. The rhythms are clear-cut, and while the thematic lines are simple, they are accompanied by most original harmonic sequences, alert and rapid. Near the end a remembrance sounds like an echo of the pensive melancholy of the first part of the symphony, followed by a rushing tumultuous end.

I knew Prokofiev well in Paris and in Russia, and feel that this symphony is an eloquent expression of the full range of his personality. It is a creation of a master-artist serene in the use and control of his medium.

From a technical perspective both recordings have responded very well to XR remastering and restoration. The 1958 Russian 'studio' recording is clearly more advanced than the earlier radio broadcast, captured original on disc rather than tape and taken from the radio feed (we've retained a very brief introduction and pay-off from the announcer). Saying that, the older recording has cleaned up remarkably well, and one quickly adapts to the slightly reduced sonic resolution presented here. There were a couple of very short drop-outs during the second movement of the 6th which have been patched using surrounding material, and I've been able to tackle a good bit of the typical higher-frequency surface noise found on acetate disc recordings of this era to the extent that it's rarely apparent to any noticeable degree.

What was most unusual was the clear use of some kind of primitive artificial reverberation at the end of the 5th Symphony recording, heard during the decay of the final chord, which was itself 'chopped' off early. I've removed this and attempted to synthesize something a little more credible with what was left - it's certainly a lot less of a jolt than the original!

Overall this recording presents two rare recordings by Stokowski that have the added benefits of being both in excellent sonic order, and of the very highest performance standards!

PROKOFIEV Symphony No. 5 in B flat, Op. 100
USSR Radio Symphony Orchestra
conducted by Leopold Stokowski
Tchaikovsky Hall, Moscow, 15th June 1958, issused as Melodya MK 1551
Recorded by Melodya during Stokowski's 1958 Russian tour, early summer, 1958, this was his only recording for the label and his only studio recording of any symphony by Prokofiev. Following this tour he was to conduct this symphony one more time only, in a 1967 concert with the American Symphony Orchestra.
Transfer of original LP disc from the collection of Edward Johnson.

PROKOFIEV Symphony No. 6 in E flat minor, Op. 111
New York Philharmonic Symphony Orchestra
conducted by Leopold Stokowski
Carnegie Hall, New York, 4th December, 1949
First US broadcast of this work, its fourth performance in the US - Stokowski had conducted its US première on 24th November 1949, and programmed it again on 25th and 26th November. There are no other recordings of Stokowski conducting this piece - this was his final performance of it.
Reel-to-reel tape copy of original acetates from the collection of Edward Johnson, transfer by Andrew Rose

XR remastering by Andrew Rose at Pristine Audio, May 2009
Cover artwork based on a photograph of Leopold Stokowski 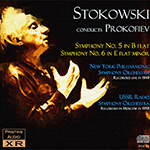 Here are two fascinating Stokowski rarities, two great 20th-century symphonies that were exactly his kind of music, and of which he made no other recordings. His 1958 Prokofiev Fifth with the USSR Radio Symphony sounds so like Rodzinski’s 1946 Columbia recording with the New York Philharmonic that for almost two minutes I could not believe it was anything else. Finally a few clipped phrases and some Russian brass convinced me otherwise. I say this as a compliment; Rodzinski’s was the finest early recording, a performance superior to Koussevitzky’s better-known version and to many that followed it. This Russian recording better captures the low brass, in particular a superbly played tuba, and has a stronger top end than the Columbia. I never heard the original Melodiya LP from which it was transferred; locally available LPs on the Bruno and MK labels were too dreadful to contemplate, the former murky, the latter as grainy and noisy as poor 78 shellac. This transfer is entirely successful, making what was obviously a so-so monaural recording eminently listenable. The digital era finally delivered two stunning Prokofiev Fifths: the Decca recording by Ashkenazy and the Concertgebouw, and—even better—DG’s Chicago Symphony under Levine.

The 20th century saw a number of cases where a premiere performance nailed a work to an extent that might never be matched; the 1939 Székely/Mengelberg Bartók Violin Concerto comes to mind. Who wouldn’t like to hear Monteux’s 1913 Le sacre, or any of Mahler’s own premieres of his symphonies? The enormous effort required to learn, prepare, and play a new work often leads to sincere, devoted, intense performances. Stokowski’s Prokofiev Sixth was such an occasion; he gave the first U.S. performance of the Sixth two weeks prior to this, its radio premiere. The 1945 symphony was expected to celebrate Russia’s victory in World War II, but its dissonance and emotional anguish led to its banishment from the Soviet Union for the composer’s lifetime, and for Stalin’s—they died on the same day. Prokofiev is reported to have said of his symphony, “Now we are rejoicing in our great victory, but each of us has wounds that cannot be healed” (from Philip Ramey’s notes to a 1982 New York Philharmonic issue of this performance). Stokowski’s performance captures that anguish better than any modern recording I know.

The qualifier is because another premiere, the first commercial recording, made by Eugene Ormandy and the Philadelphia Orchestra just six weeks later, nearly equals Stokowski in potency and surpasses it in execution—this live performance suffers from a couple of exposed horn clams. Although I do not have it on hand, I remember Ormandy’s stereo remake to have had a lesser impact. The differences between the pair of early performances are those one would expect from the two orchestras in that era: The Philadelphia strings are smooth, lush, and deep, at the expense of its fine winds; New York’s thinner, harsher strings not only let its distinctive winds come through but seem more suitable for this austere music. Ormandy’s slow Largo lacks the bite Stokowski achieves at quicker pace. Any preference between these two superb performances must be a personal one, but the Omandy has never appeared on CD, to my knowledge. The Stokowski has been available only on a rare two-LP set, a 1982 promotional issue by the New York Philharmonic. Pristine’s transfer was made directly from privately held acetates; as fine as Steven Smolian’s transfers for the LPs were, advances in technology and Andrew Rose’s skill have opened up the top end without increasing the noise, producing a more vital sound that enlivens the whole symphony. Its apparently greater harshness is merely capturing the essence of the performance and of the music. Neeme Järvi on Chandos and Theodore Kuchar on Naxos—both gloriously recorded—are my preferred modern recordings of the Sixth.

This is another necessary historical issue for which we must thank Andrew Rose’s taste and judgment as well as his skill.

This article originally appeared in Issue 33:6 (July/Aug 2010) of Fanfare Magazine