The composer plays and conducts in rare studio appearances

The 1938 recording of the second Romeo and Juliet suite came to me from a US-based collector some time ago, with the suggestion that it could really use some 'assistance' given its original provenance, released on Soviet-era Melodiya 78s. My previous experience with Russian 78s was not great - as the most junior of sound engineering trainees at the BBC nearly 20 years ago I was regularly assigned to a unit which provided taped copies of the gramophone library's rarer recordings, when requested by radio and TV producers around the corporation. Of the few 78s that I recall now was a sealed, mint, unplayed copy of an early revolutionary Russian disc, which I guess would have dated from some time in the 1920s. I looked forward to the opportunity to hear a 78 that would be as good as the day it was pressed - it remains perhaps the most atrocious commercial disc I've ever come across. I don't know what they were using in the shellac compound, but it was certainly being made down to a very low price!

Fortunately, despite some wrestling with high frequency distortion, the 1938 Prokofiev Moscow recording most certainly isn't in the same category. Unfortunately I have no information as to the provenance of the pressings used in this transfer, and as such it's been on the back-burner for quite a long time - which is a real shame as it's come out wonderfully in both restoration and through XR remastering - the edges may be a little rough at times, but there's a fabulous degree of clarity, depth and dynamics to be found here. So when Dr. John Duffy's astonishing new transfer of Prokofiev's 3rd Piano Concerto, very well recorded in Abbey Road Studio 1 in 1932, arrived recently (his pre-XR transfer can be found on our PADA Exclusives subscription service) I realised I had the ideal opportunity to put the two together and finally issue the Moscow recording.

The quality of Dr. Duffy's transfer was exemplary, with astonishingly low surface noise and a very judicious application of Ambient Stereo (if you prefer mono you can can rest easy - the Ambient Stereo effect completely cancels itself out when channels are mixed to mono). My task here was in the application of the XR remastering process, which served to open out the top end considerably, as well as rein in an at times rather heavy bass - both of these (it should be stressed) products of the original microphones and recording equipment. The result is a wonderfully clear and well-extended sound, with very little surface noise ever apparent, and the frequent impression of listening to something from the mid-1950s rather than the early 1930s. In short, it's quite remarkable!

2. Recorded in Moscow by Melodiya, 1938, transfer from a private collection
XR remastering by Andrew Rose, April 2009
Cover artwork based on a photograph of Sergei Prokofiev 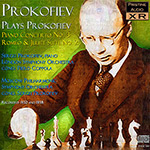