Well-recorded and convincing delivery in Vienna

We were somewhat captivated by the discovery of Hans Kann's Beethoven sonata recordings recently (PAKM033), and were intrigued to seek out more from Kann. This recording, which we think probably dates from around 1957 holds a very good, if not totally outstanding performance, captured for release on the nascent World Record Club's 13th LP release. Given Swaroswky's close relationship with the Vienna State Opera, it's perhaps a reasonable guess that the 'Vienna Festival Orchestra' is the State Opera Orchestra in disguise, so certainly a competent delivery is not only expected but achieved.

If Kann worked for me by playing the sonatas reasonably 'straight' then perhaps the same strategy is slightly less successful here, where more extravagantt fireworks might at times be welcome - you occasionally find yourself wanting Kann to drive the music (and orchestra) on just a little bit harder - but there are certainly no complaints regarding the delightful second movement, and overall the recording is a most worthwhile addition to our catalogue.

The WRC did however manage to get themselves into something of a pickle over the companion piece here, Liszt's Second Rhapsody in D minor. First up, their sleevenotes wrongly described it as the orchestral transcription of the 12th Hungarian Rhapsody for piano - it's not, it's the second. The LP's label then wrongly ascribed it the key of C sharp minor - which is the key of the piano version but not that of the orchestral transcription, which was transposed into D minor.

Finally, though, they managed to slow it down by a massive 13%, putting it somewhere below C minor, and giving it a duration of 10 minutes and 22 seconds. Correcting this so that the orchestra actually played in the correct key (and sounded a lot less dirge-like) took an astonishing one and a quarter minutes off the timing - and greatly improved the performance! How this came to pass on the original LP we can only speculate, but it would appear that for over 50 years nobody's noticed. Talk about breathing new life into a recording!...

Transfer and restoration by Peter Harrison at disk2disc, April 2009
XR remastering by Andrew Rose at Pristine Audio, April 2009
Cover artwork based on a photograph of Hans Swarowsky 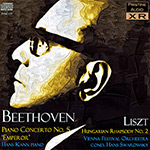