Bruno Walter conducts one of the great live performances

This 1951 live recording was amongst a very large collection of quarter-inch tapes donated to Pristine Audio in 2007, the result of a life-time's collection of fine and rare recordings.

Of the many thousands of recordings held in this priceless archive, this one was additionally hand-annotated "The Best Performance", and thus caught my eye. Although taken from an excellent BBC rebroadcast, it was clear that the audio quality of the original recording was at times less than optimal, with the often excellent acoustic of Carnegie Hall rather poorly captured during full orchestral sections. However, the soloists were well-recorded, and much cleaning up of background hiss and rumble has been possible, together with a gentle re-equalisation through the XR remastering process which has served to bring a greater focus and clarity to the recording.

Additionally, a very short gap was evident in the original broadcast, and a single orchestral chord from a more recent recording has been seamlessly merged in from another recording to prvide continuity, having first been tonally matched to this recording. It is unclear as to whether this very short gap was present in the BBC's tape copy or was a broadcast error on the day - the music faded out for about half a second, partway through an orchestral section of the first movement, and then faded quiickly back in.

Some residual tape hiss is still evident during quieter sections of the recording, but should not serve as a distraction from this 'best performance', a sentiment it's hard to disagree with!

Transfer and XR remastering by Andrew Rose at Pristine Audio, April 2009
Cover artwork based on a photograph of Leonard Rose 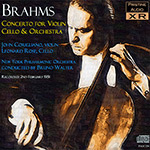