d'Indy's Symphony for Orchestra and Piano

Excellent rare French recording from 1954 reissued for the first time

We continue our exploration of some of the rarer European recordings of the 1950s, hand-picked from his extensive collection of our friend in Belgium, Jean-François Lambert, with this charming recording of perhaps Vincent D'Indy's most successful works, the Symphonie pour Orchestre et Piano sur un Chant Montagnard, Op. 25.

Technically, the original recording was good, if not brilliant. Unlike a piano concerto, in this Symphony the piano is expected to blend more completely into the orchestral sound as opposed to taking a major solo role. That said, it does seem to fall into a gap somewhere between a full piano concerto and a symphony as we know it, and this can cause a dilemma for the recording engineers in determining the overall balance between the various instrumental forces in the piece.

Although the recording does lack something 'extra' in terms of overall acoustics, the recording engineers do seem to have succeeded in finding a satisfactory balance between piano and orchestra, and the result is very pleasant indeed. A somewhat average 10" pressing displayed a fair degree of background and surface noise, despite being in excellent condition; fortunately this has not proved insurmountable, though some extra effort was required to tame a tendency to end of side distortion in the finale of the piece (the quieter ending of the first movement, at the end of side one, faired much better in this respect).

The end result, a shorter download, coming in at just under 26 minutes, is a most welcome addition to our catalogue's collection of less well-known recordings and musicians.

Transfer and XR remastering by Andrew Rose at Pristine Audio, April 2009
Cover artwork based on a photograph of Daniel Wayenberg 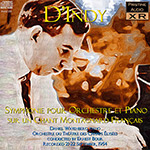