One of the most sensational performances ever recorded!

Latest technology brought to bear on this new XR remastering

Toscanini's July 1941 Buenos Aires recording of Beethoven's Choral Symphony is well-known - if not notorious - among afficionados of the maestro for two major reasons.

Firstly - and perhaps most importantly - for the performance. Here we find a driven, almost savage outpouring of music. The sheer energy of this remarkable concert appears further highlighted by the prominence in this recording of the tympani, though even without this there is an almost wild current of energy running through much of the symphony, and perhaps as a result of this it ranks amongst the all-time favourites of many people's Toscanini Beethoven 9ths.

Perhaps it would be even more universally hailed if it were not for the second matter, which is the dismal quality of the original recording. It seems that just about every fault one might hope to avoid is to be found here - lengthy sections of high disc surface noise, both in terms of hiss and crackle; the kind of clicks and scratches forever associated with analogue disc recordings; crosstalk, where we hear a completely different recording 'breaking through' and clearly audible alongside the present recording; peak distortion; a limited frequency range; a poor tonal balance; poor microphone positioning; occasional pitch instability - I could go on...

Were it not for the extraordinary nature of the performance, these technical shortcomings would surely rule out the time and effort required to try and resurrect this recording. As it is, several previous attempts to restore it have been attempted, with varying degrees of success; it is my hope and belief that the present remastering has made further and significant inroads into the creation of a truly listenable 1941 Ninth, in which one is not continually distracted and put off by extraneous noises and faults, emerging from the murky depths of a sonic soup.

In addition to major corrections to tonal balance, and the usual efforts to reduce surface noise, the restoration process here included a note-by-note removal of intrusive crosstalk, one frequency at a time. This painstaking work (where one of course has to be exceptionally careful not to remove the adjacent frequencies which make up the actual Beethoven recording) required an almost forensic approach, with continual reference to score and other recordings, and has only become feasible in the latter half of the present decade. It is my sincere hope that this, and all the other work carried out in this restoration, will succeed in finding new and enthusiastic listeners to this most remarkable historic document.

Restoration and XR remastering by Andrew Rose at Pristine Audio, March 2009
Cover artwork based on a photograph of Arturo Toscanini 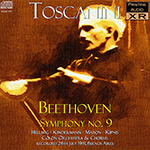