XR remastering finally brings them all up to scratch!

This fascinating collection of superb Mozart recordings straddles the very end of the 78rpm era and the birth of the British LP era, which was spearheaded by the Decca Record Company in 1950.

Each of these recordings, in its original state (and as previously digitally reissued) tells a story. The earliest of the three can be heard on LP and CD complete with crackles and clicks, having been originally transferred to master tape from 78rpm disc masters on which it was made (which quite possibly would have then been destroyed). The tonal quality of the recording was rather harsh and strident, and this is what has been heard in subsequent reissues.

The second Decca recording here was taped, and naturally later reissues have no clicks or crackles inherited from the original masters. However, the sound quality remains very similar, in a quite overbearing tonal imbalance which quickly becomes tiring on the ear. It seems Decca were yet to really hit their stride in the production of what was to become a famously high quality series of recordings through the 1950s and onward.

The final recording was far more assured. Although recorded just a few months later, in early 1951, the engineers in Philadelphia clearly knew what they were doing. Tonal balance was excellent, with perhaps just a little boxiness in the lower midrange, and slight roll-off at the top. Unlike the previous two recordings, comparisons of our transfer with the currently available Sony reissue CD will reveal a close sound match - the XR remastering here has opened the sound out slightly, though Sony's master tape was clearly in good condition, allowing for very slightly lower background noise levels.

By contrast, the effect of XR remastering on the earlier two recordings is remarkable, transforming both from rather difficult-to-enjoy vintage recordings to something far more realistic and delightful on the ear. None of the contrasts discussed here with reference to original and previous reissues are now apparent, and all three recordings now have similar sonic characteristics, characterised by a truly life-like high-fidelity tonal balance.

Transfer and XR remastering by Andrew Rose at Pristine Audio, March 2009
Cover artwork based on a portrait of Mozart
Total duration: 67:57 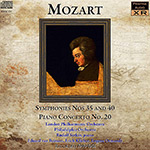