It was to my great surprise, when I chanced upon a near-mint early Ace of Clubs reissue of this recording, that it had apparently never seen any further reissue, and nothing in the digital domain. Recorded in 1950 at London's Kingsway Hall, its issue as an early UK Decca LP in 1951 apparently failed to cause any great stir, with The Gramophone being somewhat dismissive, as its critics of the day frequently were, damning it with faint praise.

Much of this may well have been down to the introduction of the new technology required to play these curious new vinyl discs - only a few months earlier an editorial was bemoaning vinyl's inability to convey the full weight of a symphony orchestra as well as good old shellac 78s!

Well thanks to the superior disc pressing technology of this slightly later reissue, and the tonal rebalancing of XR remastering, the recording can now be heard in its full glory - further enhanced in our Ambient Stereo version - and very fine it is too. I doubt if anyone had much of an idea as to what the then 38-year-old Solti would go on to achieve in his illustrious career - but here is a fine example of his brilliant talent, at the helm of an excellent orchestra, playing a very well-recorded Beethoven symphony, that's lain almost forgotten for decades. A delightful find!

Transfer and XR remastering by Andrew Rose at Pristine Audio, March 2009
Cover artwork based on a photograph of Georg Solti 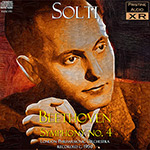