Vibrant and vivid performances from Doráti

This is an excellent record. A lovely performance of the Firebird Suite given us in a bright and clear recording on a disc with no surface at all worth calling surface. The Borodin Symphony is also very good— brilliant and exciting. Its only LP rival is Kletzki's performance on Columbia which was most warmly reviewed by A.P. last October. Unfortunately this new disc has come too late for me to make a comparison but I cannot believe that most listeners would be disappointed in it. For me, it certainly has a more interesting backing, for Kletzki does Ippolitov-Ivanov's rather thin Causasian Sketches. With the only reservation that the recorded quality does not seem quite to stay the course at the end of the Borodin side, this is a highly recommended record.

Thus wrote "T.H." in his short review of this disc's original release in The Gramophone in February 1955. A later reissue prompted a second reviewer, "E.G." in June 1968, to add:

When it comes to these performances, I confess that I have a personal and rather sentimental affection for this LP, if only because this was one of the very first records I ever had for review, and I played it a great deal. Both interpretations have a degree of heavy-handedness characteristic of Dorati during his Minneapolis period, but what really matters is the sense of conviction. However hard Dorati drives, he always encourages full-blown phrasing, and the slow movement of the symphony and the Berceuse of Firebird have all the breadth one could want. Malko's account of the Borodin—now available on HMV Concert Classics mono XLP30010—is rather subtler than this, but this coupling of two of the richest scores ever written by Russian composers is marvellous value at this price. Why, I wonder, is the Borodin—glorious in every bar—done so little in the concert hall ?

Yet since then the recording seems to have been largely forgotten, remarkably not considered worthy of CD reissue by the original record company, and thus here we present its first digital outing. Once again we express our gratitude to the Antál Doráti Centenary Society for generously supplying us with superlative transfers of mint test pressing from which to begin the remastering and restoration process.

There's little to add other than to echo the previous reviewers - these are performances with conviction and drive, which now have considerable additional sonic depth, which further drives home the passion of Doráti's performances. Highly recommended!

Transferred from the archives of The Antál Doráti Centenary Society
Restoration and XR remastering by Andrew Rose, Feburary 2009
Cover artwork based on a photograph of Antál Doráti 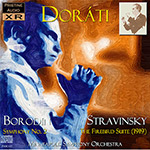