Some of the best Schumann Symphony recordings we know of

This wonderful recording of these two Schumann symphonies is one you really should hear - Krips does a marvellous job of bringing them both truly alive; the London Symphony Orchestra plays superbly; the Decca sound engineers captures them brilliantly.

We were able to use an excellent mint LP copy to make these transfers, allowing for a very light touch as far as remastering and restoration was concerned. The XR remastering process was able to add further definition and clarity to the orchestral sound, and as these were true stereo recordings, there has been no requirement for our Ambient Stereo process. Note here that in 1956 and 1957 Decca had two separate and simultaneous recordings operations going on, with seperate equipment and engineers for mono and stereo recordings.

When reviewing the original stereo issue for The Gramophone, T.H. wrote:

This was always a coupling of favourite performances of mine and it is delightful to have them now in such good stereo. Krips plays Schumann with all the innate sympathy of a true Schumann lover. He often doesn't hurry himself, but by getting the lightest of playing he avoids ever getting stodgy. The opening of No. 4 did strike me again as slow (and that means that the slow movement itself will also have to be slow, of course, for some of the music is the same), but it is well phrased and I found I soon accepted it quite happily.

The felicities of the performances are many and the Spring symphony, in particular, gets outstandingly happy playing. (Incidentally, Krips restores the opening call for horns and trumpets to the pitch at which Schumann originally wrote it—a third lower than printed in the scores.)

The stereo sound is notable for the clarity of its detail and altogether there is no possible doubt that Krips' Schumann is vastly preferable to the very unsympathetic conducting of Paray, the only stereo rival.

Although the fourth symphony has seen CD reissue some 19 years ago, we can find no reissue of this recording of the first symphony during the CD era - the superb LSO discography details its last commercial outing as a 1978 LP issue. 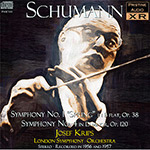