Delightful recordings with the Royal Philharmonic

When reviewing the original issue for The Gramophone in October 1954, M.M. wrote:

There is stylish playing here ; the Haydn and the Mozart both receive neat and virile performances. If the solo 'cello in the trio of the Haydn minuet sounds as if he is about to dissolve into tears, that is no defect of his playing, but a sound that all 'cellists make at that point ; and if Gui has occasional insecurities of tempo—the opening of the Haydn a case in point—they iron themselves out before any serious damage is done.

The recording is clear and forward though with no very great depth ... the technical standard is quite certainly good enough to compare with the alternatives available of each symphony...

What a shame M.M. did not have access to the XR remastered version of the recording! The sound from this HMV LP was originally flat and uninvolving - first impressions were indeed very disappointing. But what we know now is how much some early LP recordings suffered in the accurate reproduction of an even and realistic-sounding frequency response. After all this is the Royal Philharmonic Orchestra (although billed as the Glyndebourne Festival Orchestra) - they should sound a lot better than the LP would have you believe!

Thankfully our XR remastering process soon rectified this, and the full orchestra was allowed to shine at last! The two recordings were also quite different in tone, with the Haydn both heavier in the bass and shriller in the treble than the Mozart. Again, we've been able to even this discrepancy out in the remastering of this recording.

So what's it like? Well it's certainly interesting. Vittorio Gui, musical director at Glyndebourne between 1952 and 1963, made very few straight orchestral recordings indeed, concentrating instead on the operatic repertoire with which he was most associated. And to modern ears this is a rather large orchestra to be playing this repertoire. That said, it's an enjoyable and (once corrected, and especially in Ambient Stereo) well-made recording - take a listen to our sample movement above; if you like this you're bound to like the rest of this recording!

Cover artwork based on a photograph of Vittorio Gui 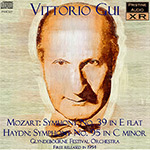