One of the truly great recordings of Brahms' 2nd Concerto

Given a tremendous new lease of life with XR remastering

Notes on the recording: On its release, this superb recording was immediately recognised as one of the great interpretations. The reviewer in Gramophone magazine (October 1952) wrote:

...here the solo piano has one of those "bodies beautiful", rather larger than life-size, which are encountered in physical culture magazines. But care is taken that this does not overweight the orchestra, which is well balanced with the soloist throughout the Concerto: the assumption of the heroic scale is justified in a work of this grandeur and with a pianist of such unimpeachable authority as Backhaus. His playing is, indeed, masterly, and the performance as a whole is splendidly integrated by Schuricht, who has always seemed to me a far more stylish and less wilful conductor than Furtwtängler or any of the other favourites of the Vienna Phil. The orchestra really plays for him, too— listen to the cantabile in the slow movement (one of Brahms' most glorious tunes). It is the soloist, however, on whom falls the main responsibility for the success or failure of this work; and Backhaus (whose pre-war recordings of the two Brahms' concertos will be remembered) combines in himself a leonine strength and a feline grace. In the first and second movements he reveals a proud dignity and a vivid sense of tonal values; but equally impressive is the delicacy and clarity of the sotto voce double-octaves in the scherzo and the delightful staccato playing in the finale (which really is grazioso, as marked)...

I recently chanced upon a near-mint original orange-label, gold-lettered British Decca pressing of this recording, and couldn't resist finding out how it would respond to the often remarkable effects of XR remastering and Ambient Stereo processing. To my ears the results were breathtaking, lifting the entire recording into a new sonic dimension and begging for a wider audience.

Transfer and XR remastering by Andrew Rose at Pristine Audio, January 2009
Cover artwork based on a photograph of Wilhelm Backhaus 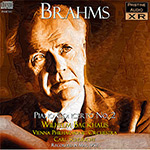