The present recordings are among Talich’s rarest discs. Although the Violin Concerto has seen limited reissue on small labels, neither recording has ever been available on LP or CD from EMI or in any of Supraphon’s Talich reissue series. (Tantalizingly, the conductor made his only recording of Tchaikovsky’s Fourth Symphony at the same sessions as the Violin Concerto, but it was never released and the masters are presumed lost.) The Piano Concerto makes its first extended play appearance in any form here.

Despite the scarcity of the original discs, two copies of each album were assembled for these transfers, and the best portions of each side were used. Some blasting in the louder passages of the Piano Concerto was present on both copies and may be due to the use of inferior shellac during wartime rather than from wear.

Producer and Audio Restoration Engineer: Mark Obert-Thorn
Cover artwork based on a photograph of Václav Talich 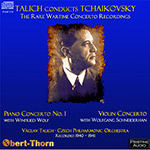