The composer conducts on this stereo 1958 recording

This excellent early stereo recording was recorded by the same orchestra and at the same venue in which Le Boeuf sur le toit was premièred some thirty-eight years earlier in February 1920, and La Création du monde on 25th October 1923, and it is surely quite possible that some of those original orchestral players were present when Milhaud returned in 1958 to set these interpretations down on tape. Dr. Duffy's excellent transfer was immediately more alive and vibrant than a rather harsh and hissy French CD issue of the same material, issued quite recently, and with the addition of careful XR remastering we have really brought this recording into the 21st century.

In addition to a very clean, clear sound, we have also been able to tackle some very wayward stereo imaging problems, caused almost certainly by variable drop-out on the master tape, and unaddressed by previous issues. Aside from a slightly rough opening five seconds of La Création du monde, this recording rarely betrays its 1950's origins, and with such highly infectious music, based on both Brazilian and American Jazz influences as interpreted by one of the great composers of the twentieth century, is a historic document to truly treasure.

Recorded in stereo at the Théâtre des Champs-Élysées, Paris, on 16, 18 and 19 March, 1958
Transfer and restoration by Dr. John Duffy

XR remastering by Andrew Rose at Pristine Audio, December 2008
Cover artwork based on a photograph of Darius Milhaud 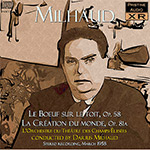