The composer conducts on a splendid early Decca LP

Sounding wonderful in this test-pressing transfer by Peter Harrison

The transfer for this restoration was made from an original, probably unplayed Decca “Factory Sample” disc and shows dramatically the astonishing recorded sound quality that Decca were able to achieve in the early days of the mono LP. Listening to the result it is hard to believe that this recording is over 57 years old. However the recording isn’t without its faults: for example occasional patches of tape flutter and scrape can be heard - but I don’t think they materially detract from a remarkable historic document. 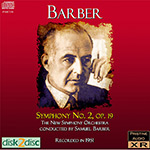