Includes the only known recording of Stokowski conducting music by Walton

These recordings were sent to Pristine by Edward Johnson, one of the guiding lights of the Stokowski Society, musicologist and author of "Stokowski - Essays in Analysis of His Art", taken from recordings held in his private collection, none of which have previously been issued.

In his letter to me, Johnson stated: "...the Walton is on this CD purely because it's Stokowski's only extant performance of any of Walton's music. But sonically it is dreadful and not release material. I only put it there for your interest...". Whether or not he intended this to be a subtle challenge I don't know, but I don't really think so. However, given the historic importance of the recording (Stokowski is known to have conducted very occasionally other works by Walton in the concert hall, but no recordings of these are thought to exist), I decided to take it on and see what could be achieved.

After making initial inroads on the sound, I sent a work-in-progress sample to Edward for his comments: "Wow ... That's pretty amazing ! ... Like I said, it was recorded onto a primitive glass acetate disc, off the air, by someone called Charles ("Jack") Baumgarten who was later to become Stokowski's assistant during the Maestro's last years. This came from a tape copy he gave me. I guess he started the recording after the announcements had finished and and stopped it as soon as the applause began ... it's great that you can work on it as I'd never have thought it would be issuable material! ... The violin solo was most probably John Corigliano, who was I think concert-master at the time..."

After much further work I reached the point where I felt I'd done as much for it as possible - numerous bumps, holes, thumps and other extraneous noises were fixed, the sound further refined and evened out, and I was happy to add the recording to this collection. There remains a small degree of distortion towards the end of the piece, and some low-level surface crackle proved impervious to processing, but otherwise it's a fine example of a very spirited performance.

Of the other recordings, the Vaughan Williams was a fine studio effort - its US debut recording no less. The piece was too long for 78rpm playback and so three further takes were attempted of a version shortened by the conductor by excising sections of the music, the final take running to 4'04" and given the matrix number XCO41010-1 for release. This first-take full-length recording was left in the vaults and only recently rediscovered.

The Schumann that forms the heart of this set is, according to Edward Johnson "a much better performance than the one he recorded for RCA the following year with "his Symphony Orchestra" and the sound, while very good, could be made even better...". The sound quality of the Enescu was pretty much the same - both came from later rebroadcasts - and I'm glad to report Edward's response to my remastering efforts just prior to our release: "I downloaded the MP3 file and it sounds wonderful!"

Restoration and XR remastering by Andrew Rose, October-November 2008
Cover artwork based on a photograph of Leopold Stokowski 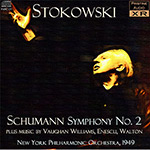