When Dr. John Duffy sent me this recording he noted "this restoration of this classic recording is the best I have ever done...", but by the time I got around to reading his comments I'd already whipped the CD out of its cover and reached the same conclusion myself.

Not only that, I also thought it clearly outshone other transfers I'd heard of the same historic recording - perhaps the only one to be sourced from some exceptional Japanese pressings. Being of a curious mind, I wondered whether it might further benefit from XR remastering - John had already shown how effective Ambient Stereo processing was.

After several days of work on the remastering I sent a copy back to John for his verdict. After taking his comments and criticisms on board, I made a few further broad tonal adjustments, resulting in the quite remarkable sound heard here, which I hope can be viewed as a truly collaborative effort, despite the two of us working around 5600 miles apart!

Dates for this recording are unusually hard to pin down. Most discographies simply opt for October-November 1938, which seems an unusually vague assertion. Dr .Duffy wonders whether part, if not all, of the recording was made immediately following the notorious Kristallnacht in Germany: "I know he spent a lot of energy & took many risks opposing Nazism & Hitler. I heard that the unusual power of his 1938 Pathétique was because he recorded it in the emotional wake following Kristallnacht."

Yet the mystery remains - as Mark Obert-Thorn notes: "Nobody knows exactly when this was recorded, which is odd for a major artist at a major label.  EMI's own CD release in their "Tchaikovsky Historical" boxed set from 1993 gives exact dates for everthing else, but only "X-XI 1938" for this recording.  Likewise, the complete Furtwangler discography by Henning Smidth Olsen assigns it to "October-November, 1938".  I'm afraid that's as close as we can get."

Whether or not there is a direct connection to Kristallnacht, or to unfolding events in general, this remains one of the most powerful readings of this symphony ever set to disc. The release of this newly remastered recording, almost 70 years to the day since those dreadful events in Germany, will I hope bring an opportunity to remember those who suffered and lost their lives at what is often seen as a beginning to one of the darkest periods in human history, and perhaps to consider whether the passionate tragedy of Tchaikovsky's grim finale, recorded in Berlin at the time, was a fitting musical response to the unfolding tragedy of Germany in 1938. 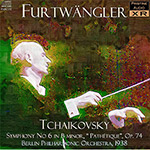