One of the most amazing acoustic restorations you'll ever hear


The acoustical recording of Holst conducting The Planets might appear at first to be an unnecessary restoration, since he recorded an electrical version only two years after he completed recording the final movement (Saturn - they were recorded non-sequentially). Yet, there are interpretive differences between the two versions, most notably in Venus, which, in 1923, has a duration of 8:04, but by 1926 it is down to 7:09. Some critics feel that the earlier effort is a better interpretation, although that cannot really be said about the central theme of Jupiter, which, in 1922, begins too fast, rapidly slows down to a crawl at the end of the side, and then resumes on the subsequent side at a more reasonable tempo. In 1926 the tempo remains proper and steady across the side break.

Irrespective of the interpretive worth of the acoustical version, for the restorer this is an example of one of the best orchestral recordings made before the adoption of the electrical method of sound recording. For one thing, it appears that Holst has made few, if any, instrumental substitutions (I cannot detect any). Therefore, a restoration can potentially result in an orchestra which sounds normal, as compared with orchestras which have, for example, tubas substituting for contrabassi. No doubt the orchestra is smaller than usual due to the physical limitations of an acoustical studio, in which everyone is trying to be as close to the recording horn as possible. Regarding the horn itself, it must have been a large one, because some sounds as low as 40 Hz are faintly visible on a spectrographic representation of the recording. It is also to be noted that the horn managed to capture some high overtones going up to nearly 5 kHz (!). While much of the recorded sound rolls off above 3 kHz, there are many overtones which can be seen, although there are also inconsistencies in their presence or absence.

The major part of the restoration process is amplifying those weak signals by building digital filters which will work on music content only. A general bass boost won't work, since, aside from the fact that the transfer function of the acoustical recording device can be only approximated, any general boosting of a frequency region will boost surface rumble along with the signal. The process used is almost 100% manual, with visible signals being boosted, and using a known-good recording as a visual reference as well as a score. In some cases low fundamentals cannot be seen, and need to be coaxed out of the noise by building a filter where that tone is expected to be. It's a painstaking process, but fortunately, with experience, it requires much less time than one might expect. The same process has been applied to some of those upper frequencies, where the signals can be seen, but are too weak to be audible. Once the process is finished, the overall equalization is then balanced against a known-good recording using Har-Bal*. This in itself requires some manual correction afterward, since the noise level in various frequency ranges can increase to an unacceptable level.

Except for gross click removal, my noise reduction techniques were mostly a manual process. Perhaps I'm a bit unconventional in this regard, but I worry that automatic processes may undo some of what I have spent so much time doing!

Since each planet, with the exception of Mercury, requires only two 78-rpm sides, editing of the sides together presented no real difficulties - with the exception of Jupiter. As mentioned above, Holst slows down to a crawl at the very end of the first side and distends the final note to an absurd length. Digitally "splicing" the two sides together at the break point would sound quite strange, at best, I ruled out using digital tempo regulation to speed up the slowed-down version, since it would, in essence, falsify Holst's performance, misguided as it was. I opted to shorten the length of the final note from the first side and move one of the audible beats very slightly, so that what we end up with is a slightly exaggerated moment of rubato followed by a steady tempo. I think this is the most musical way to edit these sides without falsifying the performance.

Also, please note that I have enhanced the sound of the cymbal wherever I have determined that Holst used one. It appears (although I cannot prove it) that Holst omitted some of the cymbal clashes from Jupiter and Uranus, although there appears to be no reason for him to have done it. Once again, with the purpose of avoiding falsification, I decided to leave these spots untouched.

N.B. We have listed this recording as an XR-remastered production as, in addition to his own specialist techniques outlined above, Aaron Z. Snyder brings to the overall sound of the recording a re-equalisation based on the principles behind Pristine Audio's remarkable XR remastering techniques, something he's also used on a number of highly acclaimed recordings available on CDs from Music & Arts.

Cover artwork based on a photograph of Gustav Holst 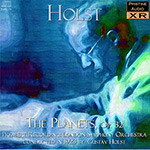 Attempting to unravel Holst's recordings of this work can be devilishly complicated, largely due to Columbia's practice at the time of re-recording sides, movements, or indeed, the entire recording, and reissuing it on discs with not only the same catalogue number, but also the same matrix numbers.

Thus it was with great relief that I was able to mine the information held in the London Symphony Orchestra's mammoth 910-page online discography [as of 2008], to figure out exactly when and where these recordings were made - you'll find the acoustic and 1926 electric remakes listed between pages 193 and 199. Here we present the information relevant to this issue:

Jupiter had already been recorded in Oct 22. Saturn & Jupiter were re-made in Feb & Sep 25, then the whole work was re-recorded electrically in Jun-Oct 26, in all cases retaining the original catalogue numbers.