One of the greatest performances on disc - in amazing sound

This super-rare recording remastered and reissued for the first time

If you're thinking of Googling this recording, I wouldn't bother - you won't find out anything about it anywhere! This ultra-rare recording came to me from an American collector. who stated "...the copy I sent you was initially transferred – not by me, I did only side-joins & minor cleaning – by the only owner I know...".

Well when I heard the transfer I knew we were onto something - it already sounded remarkable: exceptionally clean and well-recorded. I was able to make further, if rather minor, improvements to the sound quality using XR re-equalisation techniques, and it certainly sounds good in Ambient Stereo, but for a recording of this era it's remarkably true to the original - a happy result of such a good result in the studio back in 1934.

Or as my correspondent put it: "The Meyrowitz ‘Unfinished’ is among the most beautiful I know of that work, utterly amazing in his wide use of dynamics for 78s: either incredibly trusting or incredibly savvy about engineering potentialities available to him in that era."

Restoration and XR remastering by Andrew Rose at Pristine Audio, October 2008
Cover artwork based on a painting of Franz Schubert 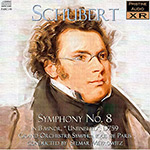