Mercury's Living Presence recordings, which began in the early 1950's, were and remain legendary. The story of Mercury records can be found at Wikipedia, from which the following excerpt is taken:

In 1951, under the direction of recording engineer C. Robert Fine and recording director David Hall, Mercury Records initiated a recording technique using a single microphone to record symphony orchestras. Fine had for several years used a single microphone for various Mercury small-ensemble classical recordings produced by John Hammond and later Mitch Miller (indeed, Miller, using his full name of Mitchell Miller, made several recordings as a featured oboe player in the late 40's for Mercury). The first record in this new Mercury Olympian Series was "Pictures at an Exhibition" performed by Rafael Kubelík and the Chicago Symphony. The group that became the most famous using this technique was the Minneapolis Symphony Orchestra, which, under the leadership of conductor Antal Dorati, made a long series of classical albums that were very highly regarded - including the first-ever complete recordings of Tchaikovsky's ballets. Dorati's 1954 single-mic recording of Tchaikovsky's "1812 Overture", which also included dramatic recordings of 1812-era artillery and the giant bell tower at Yale University, was one of only two classical albums to ring up Gold Record sales in the 1950's in the U.S.

The NY Times music critic described the Mercury sound on "Pictures at an Exhibition" as "being in the living presence of the orchestra" and Mercury eventually began releasing their classical recordings under the 'Living Presence' series' name.

The recording presented here, made in April 1952, is an excellent example of the process. It was transcribed from test pressings in the collection of Bill Newman - an honourary member of the Antal Doráti Centenary Society, Bill worked for EMI and with Doráti personally at recording sessions with the LSO in London; he was also responsible for choosing and re-issuing all the Mercury classical recordings for the British market from approx.1959 - and was both suggested and supplied for Pristine Audio remastering by the Society.

Unsurprisingly the original was in excellent condition, and the re-equalisation carried out for XR remastering was relatively minimal - a slight edginess in the upper treble centred around 5kHz was tamed, whilst we were able to bring a little 'air' back into the frequencies above 10kHz. The disc surfaces were almost immaculate and required little restoration processing, and the finished master responded excellently to the application of Ambient Stereo processing.

This is the first of what we expect to be a series of releases of rare or previously un-reissued recordings by Doráti, working in collaboration with the Antal Doráti Centenary Society - in terms both of musical and recording quality it sets the standard bar exceptionally high!

Recorded in April 1952, issued as Mercury LP MG 50010
Transferred from Mercury test pressings from the archives of The Antal Doráti Centenary Society

Restoration and XR remastering by Andrew Rose at Pristine Audio, October 2008
Cover artwork based on a photograph of Antal Doráti 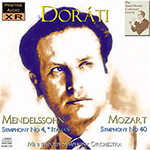