I encountered very few difficulties with the trasfer and remastering of this recording from a near-mint pressing of the original Concert Hall LP. XR processing helped to focus the overall sound and to pull back a certain tendency to over-brashness in the treble, as well as opening up some "air-space" in the very high treble frequencies that had previously been somewhat constricted. The addition of Ambient Stereo processing, which extracts and spreads the natural ambience contained within the recording, serves to further open the sound of the recording out and give a real sense of space around the instruments.

Our sample here is the final movement from the Ambient Stereo release version.

Restoration and XR remastering by Andrew Rose at Pristine Audio, October 2008
Cover artwork based on a photograph of Noel Mewton-Wood 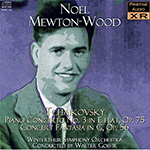