This recording was rebroadcast by BBC Radio, most probably in the late 1970s, and was well captured on top-quality open-reel tape which survived the next thirty years in excellent condition.

Although these recordings have, separately, appeared on reissues before, we think this may be the first time that this concert has been issued in its entirety (minus original announcements, which the BBC omitted in favour of their own commentary).

The recording has responded very well indeed to XR remastering and Ambient Stereo processing. Despite the relatively dry sound associated with Studio 8H, there is good presence, and not the dead sound too commonly associated with NBC Symphony Orchestra recordings of the era.

Overall, a delightful concert, an excellent performance, and an intriguing range of music!

Transfer and XR remastering by Andrew Rose at Pristine Audio, September 2008
Cover artwork based on a photograph of Erich Kleiber 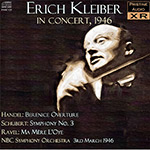