One of the greatest of conductors - at his best in Boston

Our transcription of this recording, which was re-broadcast by BBC Radio some years after it took place from good-quality transcription discs, was taken from a reel-to-reel tape recording made of that later broadcast. For the first half of the concert this was perfect - the audio was clear and the tape clean.

Two problems manifested themselves during the Tchaikovsky, however.

The first, three short sound dropouts, werealmost certainly a fault on our tape. The first of these dropouts was easily repaired - a single note sounds several times, and thus the very short missing section of one note could be reconstructed from another. The second two dropouts required more drastic measures - a different recording of the same piece, in a similar acoustic, was found. The pitches were matched, then the timing squashed to match Koussevitzky's pace precisely. The the alternative recording was converted to mono and equalised to match precisely that of the older recording, then crossfaded seamlessly into the Koussevitzky, with background hiss from the original recording added over the later one to complete the patch. The result is just about indetectable when you know where it comes, and lasts for two sections of perhaps a second's duration or so.

The second major issue can probably be traced back to the original transcription discs - a persistent whine, varying continuously in frequency between 4kHz and 6.5kHz, and probably a disc cutter head fault, could clearly be heard once the recording had been re-equalised in the XR remastering process, and had to be laboriously filtered out without damaging any of the surrounding areas. This is the kind of restoration work that has only very recently become possible, and it allows this fabulous recording to finally be issued in such splendid sound quality.

Transfer and XR remastering by Andrew Rose at Pristine Audio, September 2008
Cover artwork based on a photograph of Sergei Koussevitzky 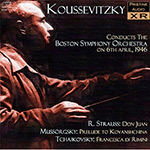