Writing in second edition of The Record Guide, in 1955, the authors noted of this recording:

Nowhere, perhaps, is Toscanini's genius more apparent than in this work. At the age of eighty-five he had lost none of the concentration and energy which he always brought to it: he sweeps irresistibly forward, as though in a single fierce creative impulse. At the climax of the first movement, where the main theme returns in the major key, the listener has a strange sensation of being at the heart of a whirlwind: he feels impelled to leave his chair and pace the room. The Scherzo is amazingly vigorous and distinct. In the Adagio, the ethereal beauty of the conception compensates for some want of tonal bloom and warmth. In the Finale the choir is first class; the soloists sound a little remote, and are far from ideally eloquent. Nevertheless, the power of this exalted, exultant movement emerges with all the splendour that has made Toscanini the foremost conductor of our age. The NBC orchestral tone, throughout, is clean and vivid.

However, in the course of the next review, a number of phrases jump out quite to suggest all was not sonically perfect with the Toscanini recording - highlighted below:

In the circumstances, Kleiber's excellent account of this work tends inevitably to be eclipsed. Yet, in fairness, we must point out that his performance is weighty in conception, finely built, and scrupulous in detail. He receives a better recording than does Toscanini: the Vienna strings sound superb across a very wide dynamic range, although in the earlier movements one might wish for the woodwind to sing out more clearly. In the finale the Viennese soloists, and particularly Anton Dermota, score heavily over the Americans. The choir is equally good, and the tonal perspective better...

If you listen to the Toscanini recording now, in its original state, it's easy to hear from where these reservations originated. The sound quality is stodgy, lumpen, flat and congested. There's an unpleasant hiss around 8kHz. The bottom end booms in the louder moments. Altogether - even in its apparently finest modern issue - it's somewhat unsatisfactory and hard work to listen to and enjoy.

I must admit it had not been my intention to remaster this recording for release - after all the RCA CD is readily available for anyone who wants to hear it, and we had only just a few weeks earlier issued Toscanini's classic 1936 reading of the same work. Yet what began as experimentation with a new test piece of software ended up producing results so stunning that I felt I had no choice but to finish the remastering work and make it available here.

First up was that "lumpen" sound I described earlier - well, as one finds over and over again with XR remastering, this kind of sound is often masking something much, much better, almost hidden in the grooves of the recording. During the restoration process I was also able to deal with a number of hum tones that aflicted previous issues, as well as do a better job of blending in a rather hissy edited section that had been dropped into the finale.

Then there's the question of Ambient Stereo, a new, sonically transparent process which extracts the ambience inherent in a recording and allows the remastering engineer to give it varying degrees of spread across a stereo (or surround) soundstage, without disturbing or disrupting the main central mono signal. The effect is to give a real sense of space, presence, and dimension to the recording.

An excerpt of this recording, made with Ambient Stereo early in the remastering process, was released on the Internet for comment and reaction. Most of this was very positive indeed - though interestingly a number of comments were sent privately, rather than being posted in the open forums where comment had been invited. It seemed a number of people didn't really want the world to know that they preferred this Ambient Stereo to the mono equivilent!

I was persuaded by a number of these (privately) enthusiastic comments to continue the remastering and then to offer the results in both mono and Ambient Stereo. I'm not shy to pin my own colours to the mast and state that I prefer the latter. As you can read from the comments above by Lynn Bayley (who at the time of writing had only heard that 5-minute test excerpt), it does seem to give the performance a cohesiveness which it has always lacked.

To my mind, and ears, this is how this recording and performance should sound - and I'm pretty certain that a good many people will agree with me.

Restoration & XR remastering by Andrew Rose at Pristine Audio, July-August 2008
Cover artwork based on a photograph of Arturo Toscanini 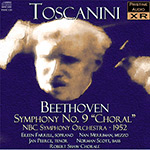 The question of what Toscanini really sounded like in live performance may never be fully answered to our satisfaction, for no other reason than that the sound quality of his surviving recordings varies so greatly in perspective and aural balance. Some are overly bright and harsh; some are bright, but not harsh; some are harsh, but not very bright; some are warm and rich with little brightness; and some, taken from a little distance from the stage, have an interesting sound. The orchestra can be heard with each section in perfect equipoise to the others, yet never “together” in the sense of a unified block of sound. Each section has a slightly discrete sound, emanating from the stage like individual strands of silver.

Andrew Rose of Pristine Classical first uncovered more ambience in a Toscanini recording than he thought possible when reprocessing the 1941 Tchaikovsky Piano Concerto No. 1 for issue. There, under layers of tight sound and overly bright strings and brass, he uncovered real hall resonance. Toscanini fans, however—including some surviving NBC musicians, whose memories played them false—accused him of adding ambience and “sweetening” the sound. He had done no such thing. What was there was what was there, no more, no less.

For this reissue of one of Toscanini’s most famous recordings, however, Rose added ambience to the sound and spread the orchestral tone slightly between two channels, producing what he calls “ambient stereo” (which is why I didn’t denote this recording as mono, though an alternative mono version is available). When I first heard a sample of his new treatment, the first five minutes of the first movement uploaded as a free sample, I admit that I was quite surprised. Having put up with 40 years of artificial stereo, I expected to dislike it. On the contrary, I found that the added ambience aided my listening enjoyment considerably. Why? Because the ambient “spread” helped link the musical phrasing by having instrumental overtones overlap in time as the music progressed.

I’ve heard six previous issues of this performance: the RCA Victrola boxed set of the nine symphonies, good solid mono sound but with a little dulling of the top; the Victrola single-disc issue, in which the third movement was split between two LP sides, good mono sound, a little dull but also a little compressed; the original Red Seal LP issue, in which the sound was brighter yet somehow not as full; the Red Seal boxed set of the nine symphonies, in which the sound was both a little fuller than the original issue and brighter than the Victrola boxed set; the RCA Gold Seal CD, much like the Victrola set, full but a little dull; and the last RCA edition of the symphonies, the 1999 twofer with the Missa solemnis, in which the sound was almost a carbon-copy of the Red Seal LP set. (I haven’t heard the latest Sony/BMG box of the complete symphonies.) In all these, I found myself continually frustrated by what I heard as an almost note-to-note reading of the score, powerful yet somehow discontinuous.

In this new transfer, the performance does not sound discontinuous. In fact, I’m now willing to place it on a par with the legendary 1936 New York Philharmonic reading (reviewed elsewhere). There is a shade more sublimity of detail and warmer tone in the Philharmonic version, despite the much scrappier sound, and in the final pages of the last movement the timpani’s crashing thunder adds much more to the excitement of the finale, but this one is very, very close.

Timings, always an indicator of how a performance of this symphony goes, are much more spacious than are any of his versions since 1936, and it shows. For quite some time, Toscanini seemed to want to compress each of the first three movements into a 13-minute time frame, the second in particular being terrifically fast in 1939 (and sounding unnervingly mechanical as a result), and even the third movement being under 14 minutes. In the 1941 version at Buenos Aires (an interesting reading in which Toscanini rebalanced the orchestra to favor lower instruments in each section), the third movement is stretched out a little, but not much. Here, as in 1936, it is more than 14 and a half minutes, allowing more majesty in its presentation, though there is more of a nudge to its forward momentum here; the music doesn’t “float” quite as it did in 1936.

Upon reaching the last movement, I felt a certain unease hearing the vocal soloists surrounded by so much ambience, particularly Eileen Farrell, whose voice rang out so commandingly in both of the early Red Seal pressings. On the other hand, Farrell’s lack of tonal dominance balances the vocal quartet better, bringing this more in line with the kind of balance Toscanini achieved with his quartets in the Missa solemnis (1939, 1940, and 1954) and the ensembles of Un ballo in maschera (1954). Also, someone very close to me who heard Peerce live at the Metropolitan Opera in the early 1960s said that the way this recording is engineered makes him sound more as he did in person as opposed to records, where he was always close-miked and tonally aggressive, and the Robert Shaw Chorale benefits even more from this perspective.

Norman Scott, so commanding in the 1948 Beethoven Ninth and as Ramfis in the 1949 Aida, is not in his best voice here, sounding a little strained, but still commanding in his delivery of Schiller’s lines. The vastly underrated Nan Merriman is splendid as always in what is perhaps the most ungrateful score for a mezzo to make her mark in. Those who follow along with a score will undoubtedly notice the myriad textural changes Toscanini made—as conductor Massimo Frecha put it in a 1960s interview, “massive changes, especially in the first movement!” But no matter. This is now a recording that easily ranks among the top four or five Beethoven Ninths of all time, a list that for me includes the 1966 Hans Schmidt-Isserstedt recording for Decca with Sutherland, Horne, King, and Talvela, and both of Karajan’s 1970s versions: the CD with Tomowa-Sintow, Baltsa, Schreier, and van Dam; and the DVD with René Kollo replacing Schreier. Enjoy!