Although all of these recording have been available either commercially or through private channels for some time, they have always failed to live up to their sonic potential. Well aware that stereo was the coming thing, Victor engineers arranged for what were to be Toscanini's final two concerts to be recorded in "stereo" - i.e. on two tape channels.

Why the inverted commas? Well, when you hear the sound they produced it is most certainly coming out of two speakers, but it's not a particularly pleasant listen, and fails to capture any of the sense of perspective or width that one would expect to find in a stereo orchestral recording. It sounds like the microphone positioning is exceptionally close, and there's nothing of the acoustic of Carnegie Hall to be heard at all. At times the soundstage is overly wide and disconnected, the sound itself hard and harsh - an uncomfortable listen. This was greatly ameliorated by the re-equalisation part of the XR processing, but still the sound was flat and "in your face".

In continuing this restoration, therefore, I soon realised that what it would need might go beyond the bounds of my previous work. I acquired new software for stereo ambience processing, allowing me to extract any hall reverberation present in the recording and enhance it, effectively pushing the orchestra "back" with respect to the ambient sound around it, but this remarkable software does not generate reverberation, working only with what it can extract from the recording itself. Here there was just about nothing to be had, and with some reluctance I applied a judicious amount of digital reverberation - just enough to give some space around the instruments.

I then returned to the stereo ambience processor, and was able to find a much better spacial balance between the orchestra and its space, narrowing the stereo field slightly for the direct sound, whilst retaining a broader soundstage for the reverberation, and effectively moving the orchestra back a few steps - whilst retaining the clarity and punch of Toscanini's sound.

I believe this recording may now come closer than almost any other in capturing the kind of sound one might have heard at a Toscanini concert in Carnegie Hall (though I'm sure if you were seated at the back of the hall it would be far more reverberant that this!). It is a great pity that so many of his finest performances have been available in poor quality sound, but here, at the very end of his exceptionally long conducting career, we may finally hear more clearly than before the true sound of the maestro at work.

NB. A section of nearly 2 minutes at the end of the third movement of Tchaikovsky's 6th Symphony has been dubbed into this recording from an inferior secondary source following the loss of this from the original master tapes. I have endeavoured to match as well as possible the sound quality of this to that of the rest of the recording, but there is some loss of clarity and some higher background noise levels to be heard here.

Recorded live at Carnegie Hall on 21st March and 3rd April, 1954
These experimental stereo recordings were made by Victor 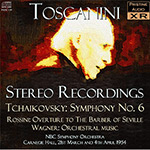 This seems to me a necessary purchase for Toscanini fans

There was definitely something wrong—or at least different—about Toscanini in his last concerts. Winding down his long career, he started this last season two weeks late due to ill health (Pierre Monteux conducted those concerts), only beginning on November 22, 1953, with his warmest, most relaxed, whimsical, almost nostalgic performance of Don Quixote. Early in 1954 he went through three grueling months in which he struggled to broadcast the Mefistofele Prologue and a complete performance of Un ballo in maschera, which cost him considerable angst in canceled and rescheduled rehearsals, replacing the lead tenor, and the performances themselves (which garnered uncharacteristically poor reviews as overloud and unsubtle). The story of his mini-stroke in the last, all-Wagner concert, while conducting the Tannhäuser Overture and Bacchanale, is well documented and has given an unfairly negative slant to his better performances in that concert. Thus it was with some trepidation that I approached my review of this disc, an all-new remastering of music from his stereo concerts, which have appeared previously on other labels (notably Music & Arts and Idis).

Much to my surprise, this Barbiere di Siviglia Overture is relaxed, warm, and quite genial. Hornist Harry Berv has his hand too far into the bell for his soft solo, a style popular at the time that is no longer in use. And the sound of the orchestra? Amazingly quite warm, not at all what you’d expect from the harsher, shriller mono recordings of the NBC Symphony.

But it is in the Tchaikovsky “Pathetique” that real differences surface. Perhaps it’s because I was raised on his 1947 recording of this symphony and, later, on the superior 1942 Philadelphia Orchestra version, but I miss the point-to-point continuity, drama, and sweep of those earlier readings. The virtuosic third movement is not quite as dazzling as his previous versions. This is slower, more pensive Tchaikovsky, almost depressed in its feeling, particularly in the final movement, which is nearly a minute and a half longer than his Philadelphia recording. Perhaps this really does mirror Toscanini’s mood at the time; and yet, though it may not be his best version, it’s hard for me to recall another stereo performance that is its superior.

I’ve said in other venues that the final all-Wagner concert wasn’t as bad as has been made out, with two exceptions. The “Forest Murmurs” from Siegfried completely lacked continuity and flow, and in the Prologue from Götterdämmerung the orchestra sounded a little rough (Berv cracks a high note and trumpeter Harry Glantz is tight and shrill), in addition to some slack playing. In relistening, however, I found the Götterdämmerung valid as a slower, more pensive reading, less exultant in celebrating the lovers’ tryst than foreshadowing Valhalla’s doom.

Producer Andrew Rose states on his Web site that the early stereo separation as well as the tight miking of these concerts was “an uncomfortable listen.” I never really felt that way about the Wagner concert, and in fact I was concerned coming into this that I wouldn’t approve of his spreading the tone across the middle. I felt it would distort Toscanini’s characteristic orchestral tone, make it too glossy and artificial, and the sweetness of the strings in the Rossini worried me a little. Yet there are official, mono recordings of the orchestra in which the strings are almost as sweet; it depended on Toscanini’s mood regarding that particular piece of music. I did an A-B comparison of the Music & Arts pressing of the Lohengrin Prelude with this one. I can confirm that Toscanini’s sound is not compromised, and in fact the sound is much more natural. On the Music & Arts CD, after the opening chord, the first violins emerge from the left speaker only, while from the right one hears an undercurrent of tape rumble. In this version, the “hole” in the middle is covered quite ingeniously and the tape sound is gone; yet everything is still crystal clear, even the sharply attacked cymbal stroke at 6:41.

The reprocessing of this or any Toscanini recording is a major bone of contention between the conductor’s rabid fans on one hand and millions of other classical music listeners on the other. Toscanini favored a dry acoustic during his performing days because it allowed listeners to hear each individual strand of the orchestra as he heard it on the podium. In his two years of retirement, however, he came to dislike the sound of his own records—except for his album of Rossini overtures, which had quite a bit of ambient hall sound. The reason for this may be found in any well-documented study of listening to music on radio or records. Prolonged listening to improperly balanced or excessive dry recordings causes listening fatigue that takes pleasure out of the listening experience. Moreover, in classical music, the lack of resonance conflicts with the natural sound spectrum that otherwise “binds” musical phrases via instrumental overtones and sonic decay in a live acoustic setting. It is exactly these overtones and decay time that Andrew Rose has restored, and it is exactly these which many Toscanini adherents find revolting, distasteful, and (in their view) dishonest reproduction.

The final verdict, of course, is up to you. Writing of the Idis release of these recordings in All Music Guide, Blair Sanderson said that because of the “unnaturally dry and airless” sound, “one needs to be enthusiastic for Toscanini’s legendary interpretations to get past these audio obstacles.” That is not the case here. This seems to me a necessary purchase for Toscanini fans, but even a good choice for those who thought his earlier readings too tense or too fast.