Two rarely-heard pieces in a superb transfer by Peter Harrison

"...an exceedingly attractive disc that should cheer anyone up..." (Gramophone, 1956)

I’m one of those sad people who watch ballet with their eyes shut. A philistine. Not to say that I don’t appreciate the sounds coming from the pit, for I do, very much. It’s what’s happening above that gets me: some twinkle-toes anorexic toodling around on stage flapping her arms and pretending to be a dying swan - no, no, I prefer using my imagination, thanks.

So listening to ballet on LP or CD is how I best like this dish served and fortunately there are chefs of genius who wrote some of their finest music in this genre - Tchaikowsky, anyone? Stravinsky? (Ducks and runs for cover.) This music, though written specifically for ballet, can stand by itself perfectly well.

There being more ballet companies than there is music for them to perform, however, other composers have resorted to satisfying the demand by arranging yet other composer’s works, frequently with great skill and the result becoming more popular than the originals. I would suggest many more people know the wonderful tunes of Offenbach through Rosenthal’s Gaîté Parisienne ballet music than from listening to the actual operettas.

There, I did it. I used the unfashionable ‘T’ word. Gosh, I’ll do it again. Tunes. Ballet music is usually full of Tunes. Often joyous, uplifting, and... oh oh, here comes another Unfashionable Word: Fun. Fun tunes! Somehow in contemporary classical music composers seem to have lost the knack - maybe even the desire - to write tuneful, fun music. It risks being labelled "light music" - and how often do we hear "light music" performed in the concert hall, or recorded?

It wasn’t always so, and not very long ago, either. Think of Pineapple Poll (Sullivan arr. Mackerras); think of Love In Bath (Handel arr. Beecham); and think of the two ballet scores derived from the music of the Strauss family: Graduation Ball, arranged in 1940 by Antal Dorati; and Le Beau Danube arranged in 1933 for Leonide Massine by Roger Désormière. Both enjoyed success: both are now almost forgotten.

(Pedant’s parentheses: the title confuses people. It is as I have written it above, and not "The Blue Danube" or even "The Beautiful Blue Danube"; and even the Decca sleeve-note writer for the US release got muddled and in one place attributed the work to Dorati!)

In 1953 Decca had released an LP of Graduation Ball and, not being afflicted with today’s stuffiness, the writers of The Record Guide enjoyed it hugely. They concluded a glowing review with the sentence: "May we venture one ungrateful remark: that the ballet Le Beau Danube, of which no recording is available, is even more consistently jolly". The recording now re-released here was Decca’s early 1956 response, and the Gramophone’s reviewer, the doughty TH, had nothing but praise for it. "Consistently jolly" it most certainly is. Fun. Tuneful. And conducted with bounce and elan by Jean Martinon.

The ‘fill up’ to the Decca LP and thus to our re-release is Rossini’s ballet music to his opera William Tell. This comes from a period where opera composers felt it necessary to include a ballet about two thirds the way through. Examples that come immediately to mind are the ballet music to Gounod’s Faust; to Verdi’s Aida and Othello; and others - even Strauss includes an optional ballet near the end of the second Act of Fledermaus. Here’s an LP sleeve-note writer, in 1972, bewailing the practice:

"Any excuse, however far-fetched, was used to bring in a ballet... it was a necessary evil to which an opera often owed its success or failure... The often dramatically inappropriate ballet insertions [which] merely interrupted the course of the action have [since] been eliminated from many operas. In some cases, however, this has meant that music has been forgotten which fully deserves to survive..."

Rossini’s William Tell ballet music is a case in point. Although everyone knows the overture to the opera - or at least its second part - who knows the complete work? It’s not one of his most popular. And the ballet music is almost completely forgotten. So here we have it: a little, neglected masterpiece.

As the rain buckets down outside my window on a July evening in England, it’s appropriate for me to repeat the closing words of TH’s review: "an exceedingly attractive disc that should cheer anyone up on a winter’s day".

Transfer and XR remastering by Peter Harrison at disk2disc, July 2008
Cover artwork based on a photograph of Jean Martinon. 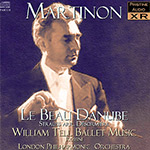