This restoration stands amongst the hardest I've had to tackle. The original acetate source material was unavailable to me, as is often the case in recordings such as this, and therefore I was working from a good CD copy of this, sent to me by a collector. The greatest obstacle for the listener to this particular recording has always been the huge amount of surface noise, clicks, crackles, splats, interference and so forth, and it's in tackling this that I've devoted the greatest part of my work effort.

The slow, painstaking removal of these extraneous noises, and at times reconstruction of the holes they left in the audio, took many days of work. I also worked hard to reduce the very high levels of surface noise, fill dropouts, correct both overall pitch (to A440) and fix a small pitch instability at one point in the recording. As with other difficult recordings I used a dual-XR approach, allowing XR equalisation to act as a primary noise reduction tool prior to the use of digital NR to further help control hiss.

There do still remain areas of high background noise. Some disc sides were considerably noisier than others, and to preserve as much of the musical sound as possible one has to accept sections of higher background noise. With a performance such as this, widely regarded as perhaps Toscanini's finest recorded interpretation of this work, I suspect most listeners will be too drawn in by the music to be too aware of the shortcomings that remain in the recording.

NB. The original recording of this concert omits two short sections in the finale comprising a total of perhaps ten seconds of music, missing due to disc recording errors. The copy from which the present recording was restored had had alternative takes from contemporary Toscanini accounts edited in to fill these gaps. Rather than exclude them I have sought to blend them in more effectively and seamlessly than was originally the case, in order to present a convincing full account of the Symphony as it would have sounded to radio listeners in 1936. 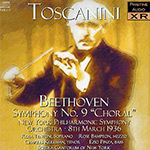 Toscanini’s long and often anguished attempts to come to grips with Beethoven’s Ninth stem from his first performance in 1902 and ended with his final studio recording a half-century later—a recording I’ve never liked because of its static rhythms and phrase-to-phrase pacing. David Hamilton, writing in High Fidelity many years ago, said that it seemed to him as if Toscanini was lining up each chord and phrase to be voiced vertically, trying to get all the balances right but missing the flow of the music. I agree.

This is neither the time nor place to detail his 11 performances of the Symphony between 1936 and 1952, of which I’ve heard six, but in general terms it always seemed to me that he vacillated between trying to conduct it in a spacious style, relating it to the Missa solemnis, and trying to conduct it in a taut, linear way, relating it to the late quartets. Of the linear performances, the most successful were his 1948 NBC telecast, particularly in the first two movements where he allowed some generous rubato for “breathing space,” and the 1939 NBC account in the last two movements. The four performances where he tried to present a grander, more spacious interpretation are this one, the first NBC broadcast of 1938, the 1941 Buenos Aires performance (a great interpretation, second in originality of thought to this one), and the 1952 recording. It is the considered opinion of most Toscanini experts that the 1936 is the best of them all, but until now it only existed in very poor quality sound.

In addition, the copies that circulated were either incomplete—missing the end of the first movement, the beginning of the fourth up to the entrance of the basses, and a choral section—or complete, using inserts by engineer Tony Paterno from the 1952 studio recording. Paterno purposely distorted the 1952 inserts by playing them through speakers with a microphone and crushed cellophane paper to simulate the original surface noise. I’ve only heard the incomplete version before and, though the performance was indeed splendid, the sound quality always put me off. Yet, unknown to us, there was a second, more complete version—in even worse sound—in the possession of NBC violinist Edwin Bachmann, which only surfaced after his death in the early 1980s. This issue uses the patches from the Bachmann recording, except for one 10-second bit taken from the 1938 NBC performance (minus cellophane, thankfully).

Now that I’ve explained so much about the sources and Toscanini’s approach to the work, there’s unfortunately little room to describe the performance. It is sublime. Even confirmed Toscanini-haters have been known to succumb to its charms. One scribe has even opined that it sounds as if Beethoven himself, and not Toscanini, is conducting it. My only caveat is in the singing of soprano Rosa Tentoni. She was a highly musical artist but did not have a very pleasant tone. Tenor Kullmann, who shortly afterwards went into decline, is superb.

Pristine’s transfer, removing most blemishes (including static spits) and equalizing the sound, gives us as fine a version as I’ve ever heard, except in the last movement where certain instruments (particularly the basses) still sound distorted. The high end seems a little “hot” to me, but this can be rectified by reducing treble somewhat. Otherwise, this is a superb issue to which I can only give my highest recommendation, despite the limitations.