Only once did Toscanini programme an all-Debussy concert - in 1936, his final season with the Philharmonic-Symphony Society of New York. There were three performances - on 16th, 17th and 19th April, 1936 - the latter being the concert broadcast and presented here.

However, Debussy was a firm favourite of Toscanini's, and he conducted the Italian première of Pelléas et Mélisande in 1908. He'd come to the score some four years earlier, in 1904, and shortly after wrote to a friend:

I hardly knew the name of [a] composer who has won all your sympathy: the Frenchman Debussy with his Pelléas and Mélisande.... His art overturns everything that has been done until now. He doesn't have [Richard] Strauss's technique, but he is a great genius, more elegant and undoubtedly more daring. On first venturing upon him, you are completely disoriented, but once you have begun to converse a little more freely with his language - and that of his inspirer Maeterlinck - you end up being fascinated. Thinking of the theatre of Maeterlinck's characters, I can confirm my opinion that Debussy's music is the fulfillment of that art. However, our public today is not yet mature to sense this, let alone accept it.

Toscanini met Debussy for the first time in Paris in 1910, and later corresponded with him on a number of occasions - including asking for - and gaining - permission from the composer to adjust aspects of the orchestration in La Mer with doublings and rebalancings in order to improve the clarity of sound, particularly in the inner voices.

He continued to programme Debussy's music regularly throughout his later years with the NBC Symphony Orchestra, but never again was the listening public treated to a full-length concert such as this, where Toscanini was able to explore both very early and very late compositions, leading his audience on a musical journey through some of the composer's very finest orchestral output.

Notes on the remastering: At least two versions of this recording have circulated amongst collectors over the years, and parts of it surfaced some time back on a Music and Arts CD release. Until now, however, no commercial release has ever taken place, quite possibly as a result of the poor quality of the original recordings, made onto acetate 78rpm discs by recording directly off-air from the AM concert broadcast.

This has a number of implications, some of which are more readily overcome than others. The clicks and crackles of the disc surface, and a good deal of surface noise, have been dealt with. A heavy hum has also been removed. Pitch instabilities and variations have been smoothed out. The tonal balance has been improved considerably.

What cannot be "fixed" is the narrow frequency range captured from the broadcast - there simply isn't anything else above the highest frequencies heard here to be had. Likewise the limited dynamic range, and tendency to slight overload distortion during some loud passages, is indelibly branded onto this recording, and one can only attempt to make the best of this type of problem. There were also a handful of minor dropouts and moments of interferenceand other noises which proved beyond repair.

Overall, however, I judge this historic recording to be a more than worthwhile release, as it gives us a unique chance to witness the full sweep of Toscanini's Debussy at a time when he was at the peak of his powers. There is indeed much to be enjoyed here.

This recording was taken from off-air acetate disc recordings made from a WABC New York AM radio broadcast. We have aimed to preserve as much of the broadcast as was available to us, however the spoken introduction to Part Two is incomplete. 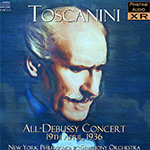 As for the performances, they are uniformly excellent

There is so much to say about this album that I scarcely know where to begin, or in which order to say them. Therefore, I hope the reader will forgive me if I seem to jump around a bit.

First and foremost, this was a remarkable concert for several reasons. With the exceptions of the wonderful, underrated Marche eccosaise and Ravel’s orchestration of an earlier Danse included in an all-Debussy concert with NBC almost exactly four years later, these discs represent all of the Debussy that Toscanini ever performed publicly in America or England. Stubborn old mule that he was, he never included the third nocturne, “Sirenes,” even when (as here) he had a women’s chorus to sing it, or other works such as Jeux, the other two Images, or Estampes. This is his seventh available version of La mer on records and the fifth version of “Ibéria,” and these two major works were previously issued on a Music & Arts CD, though not in such clear sound (more on that later). In general outline and detail they vary little from his other versions, but they are not identical either. In general, these 1936 performances, even when faster than their later counterparts, show a greater relaxation of momentum within the basically consistent tempos, particularly the second movement of “Ibéria” (Perfumes of the night) which is considerably slower than most of his other versions.

Secondly, there is the sound quality of the New York Philharmonic, imperfectly captured to be sure but still basically warmer, lusher, more equal in tonal balance, which makes it a better Debussy orchestra than the often brighter sonorities of the NBC Symphony. Flutist John Amans, practically a legend in New York, plays sensuously in the Prélude à l’aprés-midi d’un faune, and first horn Bruno Jaenicke is likewise more elegant and sweeter of tone than Harry Berv. Also, these recordings, unlike the NBC documents, were miked some distance from the stage, which gave a greater ambience to the sound. Only the Philadelphia recordings of La mer and “Ibéria,” and the NBC recording of the latter work, have quite as magical a sound. From this perspective, the common complaint that Toscanini made the inner voices too clear, that he did not respect the composer’s wishes for ambient sound in performance, is moot. Listening from an audience perspective, as we can here, as opposed to the “podium perspective” Toscanini demanded in his NBC years, we realize that his doubling of winds to clarify texture led not to a stark, dry, grating sound, as is so often accused of him (particularly by Joseph Horowitz), but, in live performance, to a shimmering quality, almost like strands of silver gently radiating from the stage like a shower of stars. In Damoiselle élue, this effect is heightened by the American debut of a then-unknown soprano, Bidù Sayão, whose mother-of-pearl vocal quality adds to the shimmering.

That all this may be heard despite the horribly limited sonics and rough condition of the original broadcast acetates is a tribute to engineer Andrew Rose. In some circles he has been criticized for artificially enhancing the Toscanini sound by restoring both upper and lower frequencies not audible on the original recordings, the theory being that this falsifies the sound of Toscanini’s orchestra. This would be true if he boosted frequencies beyond normal levels, added resonance, flattened response, or did any of the other questionable things that RCA Victor did during the late 1950s and throughout the 1960s. But he has not. He has simply taken a normal recording of each work, created a sound print in order adequately to judge the frequency range that such pieces normally produce, and then superimposed that sound print on older recordings. If the resultant sound is different from what is actually on the record—which, after all, is simply an artifact and not a real performance—it is usually because in clarifying so much, his process sometimes exposes flaws originally hidden by the original duller sound. Certainly there are strange and unrealistic sounds on this recording. The basses and low trombones in St. Sébastien sound muffled, there is some going out of phase in the middle of the Prélude, and in both pieces in which they participate, the Women’s Chorus sounds occasionally occluded and fuzzy. I happen to have copies of both St. Sébastien and the Prélude pretreatment, and exactly the same problems can be heard—only much less in focus. Clearing up an old recording, if done properly as it is here, is agreeable to the ear and far from distortion. How can it be “false” if a flute sounds like a flute, a horn like a horn, and violins like violins?

As for the performances, they are uniformly excellent. Because of the sound limitations, I personally prefer the NBC recordings of La mer and “Ibéria,” but as mentioned, the middle movement of “Ibéria” here is much more measured. “Nuages” and “Fêtes” were played pretty much the same way by Toscanini throughout his career on radio and records. This performance of the Prélude is nearly a half-minute slower than the NBC recording, the flute solo much slower and more erotic, the strings floating as if in a cloud. This is the only known recorded performance by Toscanini of The Martyrdom of St. Sébastien, and it’s exquisitely molded and chiseled.

I compared this La mer to the 1942 Philadelphia and 1950 NBC recordings, and came away with some amazing surprises. Without going into a section-by-section comparison, what I found runs completely counter to the generalization that the Toscanini of 1935–42 was slower and more sober than was his later self. The first movement as played by the Philharmonic is nearly, but not quite, as slow as the 1950 recording, and there is a rare lapse by hornist Jaenicke, who does not put has hand far enough into the bell of his instrument to create the on-off muted effects that Debussy called for. By way of compensation, however, the basses and cellos (the latter led by the superb Alfred Wallenstein) are far richer and lusher than their NBC counterparts and, wonder of wonders, the pause before the final section is elongated to create greater suspense. The 1936 second movement, however, is practically a fevered rush of sound, not only faster than the Philadelphia recording (which is in every other respect faster than both the 1936 and 1950 performances) but nearly a half-minute faster than its NBC counterpart! The upper strings and winds have some distortion in the first and third movements yet, paradoxically, the much louder second movement is virtually distortion-free.

The real gem of this collection is La demoiselle élue, however. The opening string passages are simply unworldly; Rose Bampton was a fairly good singer; stuck her entire career between mezzo and soprano, she had the range of the first but the timbre of the latter. Poor woman. She does, however, shape the music imaginatively, and is sensitive to mood. Amans’s flute is simply superb here, as it was in the Prélude. From the very first notes of her entrance, Sayão is outstanding in every way, despite one (and only one) lapse into one of her little sobs. Her upper range gleams like a sparkler; her French is surprisingly good; it’s small wonder she was snapped up by the Metropolitan Opera. At 15:42 she floats a note gorgeously. And, in this performance, Toscanini’s floating continues; there is no nudging-forward of the tempo, even though it is only slightly slower than the 1940 NBC performance.

If this is your first exposure to Toscanini’s Debussy, you will have a good impression despite the sound problems. Most of the announcements are included intact, and it’s comical to hear a very sad-sounding voice tell us that “this great leader” will not be returning next year, so the Philharmonic needs your support more than ever.